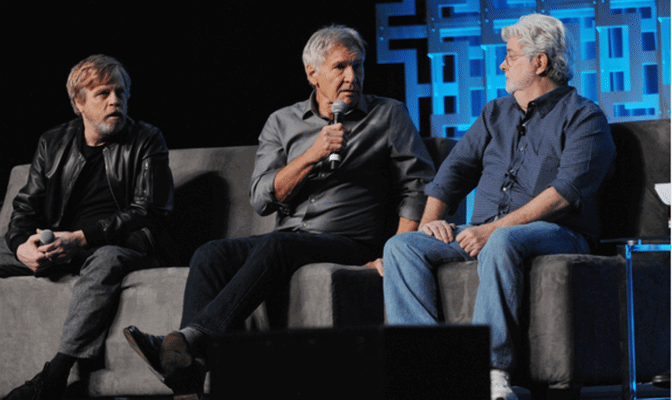 This week is my third time attending Star Wars Celebration, but it’s the first time that actually feels like there’s something worth celebrating.

When I went to the show at the Los Angeles Convention Center ten years ago, the prequel trilogy (which was met with mixed-at-absolute-best reactions) had ended a couple years earlier and there were no new Star Wars movies in sight. It was the 30th anniversary of the franchise, but in a lot of ways it felt like Star Wars’ funeral.

At the 2015 Celebration in Anaheim, Star Wars fans finally had something to look forward to once again. It was exciting, but it still wasn’t concrete. The possibility of quality new Star Wars movies was there, but it would still be another eight months or so before the first wave of the phenomenon’s resurrection really hit.

Now, we’re in the midst of something of a Star Wars renaissance. After two highly-successful and largely critically-embraced entries in the series (“The Force Awakens” and “Rogue One”), devotees can rest easy knowing their favorite galaxy far, far away is in good hands under its new owners at Disney. And that sigh of relief has helped usher in an exuberant beginning to Star Wars Celebration 2017 at the Orange County Convention Center in Orlando, Florida.

The very first panel on the first day of this year’s Celebration was an eagerly-anticipated observance of Star Wars’ 40th anniversary, and the event pulled out all the stops to make sure this gala was a memorable one. An early surprise was Lucasfilm president Kathleen Kennedy’s introduction of Star Wars creator George Lucas, who remained on the panel throughout, as some of the most famous actors from throughout the series’ four-decade history came out to chat with him and host Warwick Davis (who played Wicket the Ewok in “Return of the Jedi”).

The whole thing felt a little bit like “George Lucas, This is Your Life” as we proceeded through the prequels—with stars Ian McDiarmid (Emperor Palpatine) and Hayden Christensen (Anakin Skywalker) and then into the original trilogy—featuring Anthony Daniels (C-3PO), Peter Mayhew (Chewbacca), Billy Dee Williams (Lando Calrissian) and an extended chat with Mark Hamill (Luke Skywalker). But the biggest shock of the morning came when none other than Harrison Ford (Han Solo) joined the panel on the Galaxy Stage.

The entire affair wrapped up with another huge surprise—a secret mini-concert with John Williams and the Orlando Philharmonic Orchestra, whose stage had been hidden behind a large curtain in the hall the entire time. The group played Princess Leia’s theme in tribute to the late Carrie Fisher (as part of a longer, heartfelt honorarium with Fisher’s daughter Billie Lourd) and then went on to perform the Star Wars Main Title and closed with the Imperial March.

After such a momentous kickoff, the rest of the inaugural day at Star Wars Celebration felt a little bit more relaxed. I walked about half of the vast exhibit hall floor, checked out a number of the booths, did some shopping—I picked up a couple of the 40th Anniversary Star Wars pins—and then headed to my final panel of the day: the Disney Parks merchandise panel.

With the convention hall closing pretty soon afterward, the first day at Star Wars Celebration began to wind down. My coworkers and I had an Inside the Magic team dinner at the Indiana Jones-themed Jock Lindsay’s Hangar Bar restaurant in Disney Springs, and we began to prepare for day two.