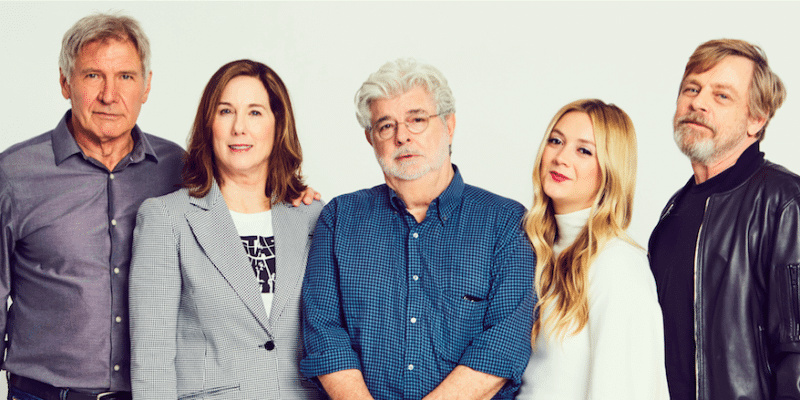 Star Wars Celebration 2017 kicked off with the emotional and star-studded “40 Years of Star Wars” panel that only got more epic when Harrison Ford (Han Solo) made a surprise appearance. He joined Star Wars creator George Lucas– also in an unannounced appearance that ran throughout the panel, plus actors Mark Hamill (Luke Skywalker), Peter Mayhew (Chewbacca), Anthony Daniels (C-3PO), and Billy Dee Williams (Lando Calrissian) on stage as they all talked about their roles in the Star Wars universe with host Warwick Davis (Wicket the Ewok). Referring to the complicated film dialogue, Ford teased, “You can type this stuff, but you can’t say it, George.”

Lucas teased right back. “I cast you because you know how to fly,” he told Ford. “Fly, yes. Land, no,” he replied, referencing his other George Lucas-created megahit franchise, Indiana Jones. The panel began earlier with producer Kathleen Kennedy introducing George Lucas, who spoke to fans about the history of the film. “I’m not supposed to say this, but it’s a film for 12-year-olds,” he said to laughs from the crowd. He went on to explain that “Star Wars” was designed to help an adolescent enter into the world of adulthood, and as mythology to help differentiate good from evil. Warwick Davis took the stage to interview Lucas for a bit. He read a letter that he had written to Lucas as a child asking for “Star Wars” action figures, then showed the audience a childhood photo of himself with the figures. “Thank you sincerely, George, for all the opportunities you’ve given me,” Davis said. “Star Wars” producer Dave Filoni joined Lucas on stage to talk about the experience of bringing Star Wars to television with the animated “Clone Wars” series. Liam Neeson (Qui-Gon Jinn) and Samuel L. Jackson (Mace Windu) made appearances via video while Hayden Christensen (Anakin Skywalker) and Ian McDiarmid (Emperor Palpatine) stopped by to chat about their roles in the prequels.