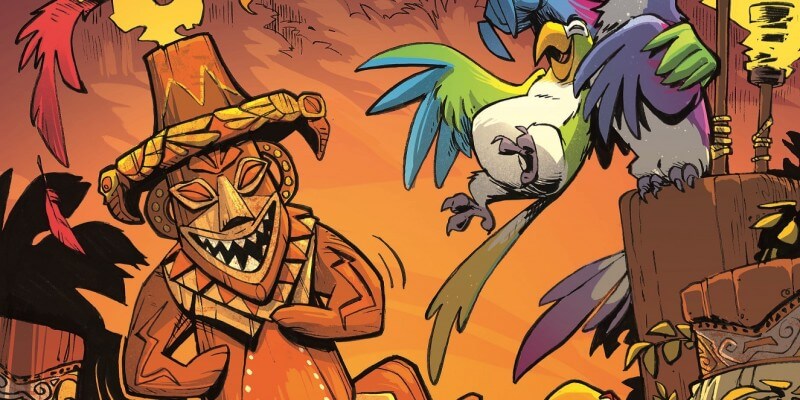 The Disney Kingdoms line from Marvel Comics launched in 2014 with the highly-acclaimed “Seekers of the Weird,” and has been going strong ever since, following through with the similarly popular titles “Figment,”  “Big Thunder Mountain,” and “The Haunted Mansion.”

Now we at ITM are thrilled to be the first to announce the news that the next five-issue miniseries will be “Enchanted Tiki Room,” based on the classic attraction at Disneyland, Walt Disney World’s Magic Kingdom, and Tokyo Disneyland. The book will begin hitting shelves this September at comic shops and at Disney parks themselves.

From the official announcement:

Welcome to the Enchanted Tiki Room, a place of legend…of fantasy…and mystery. Here—on an isolated island populated by talking (and singing) birds and plants and ancient Tiki gods–almost anything can happen and does. As the next boat arrives with new visitors, what stories will unfold, what mysteries will be revealed and how are they all connected? Summer ain’t over yet, so grab your flip-flops, pop open your beach chair, and book your vacation with the latest Disney Kingdoms series!

Here’s an exclusive first look at the cover for “Enchanted Tiki Room” issue #1:

In an interview with the creative team behind “Enchanted Tiki Room” and the Disney Kingdoms line as a whole, Imagineer Andy DiGenova gave me some insight as to how the comic came about, and why:

“We definitely have a list of the attractions that we would love to explore, and the Enchanted Tiki Room has been on that list. And with each of these books, we’re always just looking to mix it up and do something that feels different, kind of a whole new flavor to bring to the Disney Kingdoms brand. And we had done a lot of adventure stories, we’d done ‘Figment,’ but we’ve never done anything like this, where our main characters are animals. So [the Tiki Room] just brought a whole new style to Disney Kingdoms that we thought would be really fun and we thought would set it apart from what we had already done.”

Imagineer Tom Morris added, “I think also one of the objectives of Disney Kingdoms is to kind of cross-pollinate the Marvel fan crowd and reader base along with the Disney fan crowd. We tried to find the commonalities [between the two] and I think tiki culture [and the] Tiki Room seemed like it was a logical place to go. Also the Tiki Room hasn’t had a lot of limelight lately, so we thought, ‘time for the Tiki Room to get some light shed on it.'”

Writer Jon Adams explained the anthology-type storytelling he is utilizing in the comic, as opposed to an over-arching story across all five issues, and the challenges that format presented. “Essentially what we have is sort of a ‘Fantasy Island’-like scenario, where each week, visitors are coming to the island. And for this series, everyone that’s coming there, whether or not they know it, they’re facing some sort of personal issues. And through the series they learn and grow and eventually, if all goes well, then they resolve those issues and are better for it in the end.”

“I think it’s a really interesting thing. I think it ends up being that I need to balance a lot of pieces. It’s sort of a big puzzle with all of these pieces that come together. It’s an issue of figuring out how to fit them all together in a way that makes sense, and is natural, and still interesting.”

Brian Crosby, a former Imagineer and current Creative Director of Themed Entertainment at Marvel, explained his role in the creation of the comic series. “This allows me to continue to play in the Disney sandbox, and I think it’s a really great blending of what Marvel does best and what Disney does best in bringing these characters and stories to life. And [now] Marvel brings them to life in the form of the comic books.”

“It’s really fun for me to still remain involved on that side, especially because my role on this is to, along with the Imagineering guys, kind of oversee the story development, and we’re intimately involved with the portrayal of each of the characters, and making sure that it feels on-brand, from a Disney perspective, and in maintaining the Disney Kingdoms brand, because that in and of itself has become a thing.”

“[We’re] making sure everything we do in this line of comics feels authentically Disney, and it’s true to the stories that we’re already telling in the parks, and that what people are familiar with and love about those stories, as they experience them in the theme park, is then carried over and expanded upon in the comic book format. So that was really the impetus behind the whole line. And so any time we take on a new attraction, we always look at it through that lens: ‘Are we still being true to what the original intent of the attraction was?'”

Andy DiGenova addressed whether or not we would be encountering any of the familiar Tiki Room characters in the comic version. “You better believe it! How about all of them? That’s one of the great things about these comic books, is we get to take the preexisting characters that were created for the attraction and add to them and have fun with them. But then we’ve got great writers like Jon who get to create new characters that interact with the characters that have already been established. And it’s that mix of the two that really makes it fun, and something new for Disney fans.”

Tom Morris discussed how the artwork will reflect the tone of the attractions in the parks. “It’s certainly going to pay homage to the architecture and to the place-making that everyone is familiar with, and we’re going to pull a little bit from all of our locations. So you may see a couple of the things from [parks other than Disneyland], like the birds from the outside of the Tiki Room in Florida might make an appearance at some point. Aspects of the attraction in Florida will be blended in, so that we’re kind of creating the uber-Tiki Room, if you will.

“But I think it will be familiar, things that you love about it will be there, but then there [will also] be new aspects, new facets to it that are unexpected and surprising. Because we always want to open up a new world. [With] anything that we do, Cars Land for example, we went beyond the film, and showed some of those place that were not completely in the film but were right around the corner. And we did that with ‘Haunted Mansion‘ and ‘Big Thunder’ and all of the Disney Kingdoms series, and ‘Tiki Room’ will not be any different in that regard.”

Imagineer Josh Shipley concluded the discussion with the bottom line of what fans can except from the “Enchanted Tiki Room” comic book. “This [attraction] in particular is a location that has many years in the parks, and it has a historical significance, and it has its own place within the heritage now. So what we would hope, when people read this, is that they don’t just take this as a story from that place. But we would hope that people would read it and then be inspired to want to go to the park and visit the attractions.”

“Even though these stories are fresh and new, the characters are familiar, and the references and a lot of the visuals are familiar. And even as we now review story elements and art that comes through, we ourselves start to feel inspired to the point that even we would like to go and revisit the attraction that we know and love already. That’s what we would hope that readers take from this, is that they would read this and say, ‘I can’t wait for my next trip to the nearest Disney park that has a Tiki Room,’ and visit this attraction, and visit these birds, and feel like you have a little insight into a fun backstory, that was not necessarily ever told before, but is just fun in spirit, and enjoy the Tiki Room all that much more.”