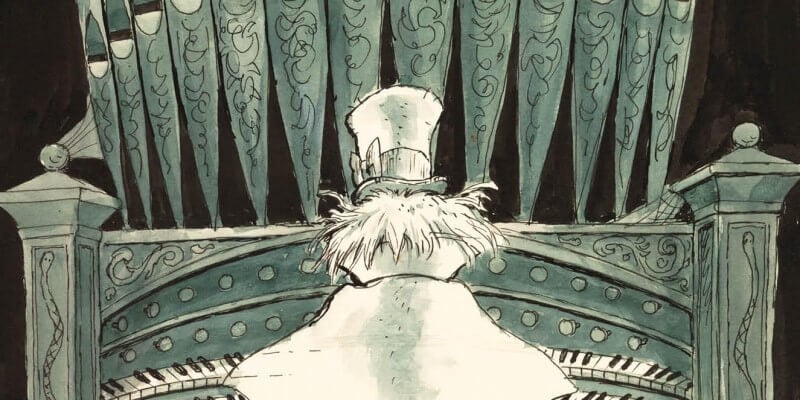 “The Haunted Mansion” comic book isn’t interested in giving the world famous Disneyland attraction a definitive backstory.  That’s what writer Joshua Williamson told us when we interviewed him last week about the newest release from Marvel’s Disney Kingdoms imprint.

In fact, the comic addresses the many fan-generated theories and Imagineer-concocted origin stories for the ride on its very first page, while at the same time deliberately leaving them– mostly– unconfirmed.

The story then delves into the lives of a meek teenage boy and his bold adventurer grandfather, who vow to explore the (appropriately) New Orleans-set estate together. What follows is a fun yarn that rather closely mirrors the experience that a child might have on his first visit to the Anaheim version of the attraction– the exterior of the house is depicted in the comic as a close replica of Disneyland’s famous Victorian facade, as opposed to the Colonial architecture of the Walt Disney World version. It’s those children at which the writing here is obviously aimed, so it’s difficult to find fault with the simplicity of the plot or dialogue. One can imagine a young boy or girl being exposed to this comic before having experienced the attraction, and then summoning the courage to enter the mansion’s foreboding foyer for the first time on his or her next trip to Disneyland. As an introduction to one of Disney’s most beloved and protected IPs, the book works wonders.

Williamson (perhaps most reknown for his Image comics titles “Nailbiter,” “Birthright,” and similarly-haunted-house-themed “Ghosted”) does a good job of enticing the reader, along with our protagonist Danny, into the mansion and introducing us one-by-one to its many grim, grinning ghosts. Memorable lines from the ride are paraphrased in abundance, and anyone familiar with the inside of the Haunted Mansion show building will instantly recognize the flow of events. The artwork by Jorge Coelho (of Boom! Studios’ “John Flood,” “Sleepy Hollow,” and “Polarity”) is moody and occasionally evocative, if otherwise unremarkable. Again, many internationally-familiar theme park icons from the attraction appear within the pages, so as long as we know what the drawings are meant to represent (and we do), the art has done its job. “The Haunted Mansion,” in its opening chapter at least, touches on the themes of bravery and self-sacrifice, but it remains to be seen how the story will play out over the five-part miniseries. There’s a cliffhanger in store at the end of issue one, of course, and little does our hero know that something has gone terribly awry inside the mansion. It’s up to Danny to help the undead denizens of this ghostly retreat reclaim their freedom and return to their happy haunting ways.

All told, “The Haunted Mansion” comic book will likely make a great gift for the younger Disneyland fan (or anyone with a hardcore passion for the delightfully unlivable abode in New Orleans Square,) especially once the complete series is collected in trade paperback/hardcover form. For now, the more devoted Haunted Mansion fans will have to wait a month between issues to devour the rest of the story. Comments Off on REVIEW: Marvel’s “The Haunted Mansion” comic book brings the world famous Disneyland attraction to life on the page