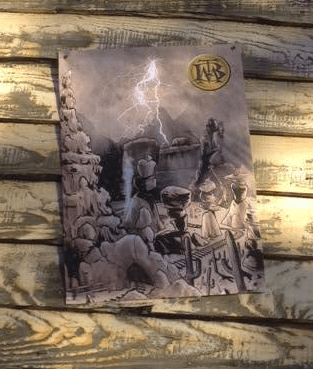 With Seekers of the Weird and Figment wrapped up, Disney and Marvel have turned their attention to another theme park attraction for the next Disney Kingdoms comic book series.

Today only at the Magic Kingdom and Disneyland, posters have popped up at Big Thunder Mountain Railroad, offering a first look at what appears to be artwork from a new comic. Update: A day after the new comic was teased, it has been officially announced that Big Thunder Mountain Railroad is indeed the next installment in the Disney Kingdoms series. A first look at the cover has been revealed: It’ll be another 5 issue series, like its two predecessors, edited by Bill Rosemann, written by Dennis Hopeless, and drawn by artist Tigh Walker.

The series will be set in a “Gold Rush town where daring men and women were in a daily battle between man and mountain,” launching in spring 2015.