Walt Disney World today pulled back the curtain on the last piece of New Fantasyland, the wonderfully fun Seven Dwarfs Mine Train. It’s the centerpiece of the expanded Magic Kingdom land, bringing back the story of “Snow White and the Seven Dwarfs” to the park from a whole new perspective.

When Snow White’s Scary Adventures closed in 2012 to make way for Princess Fairytale Hall, fans eagerly awaited the return of Disney’s most classic of animated film characters. Though the ride isn’t officially open yet, with a grand opening date announced to be May 28, today’s “sneak peek” for invited press and their guests revealed an impressively new telling of that classic story.

Take a ride on this new attraction in the POV videos below from the front and back rows, during the day and at night. The first two videos are using mounted cameras for a perfectly smooth ride and also leave out the attraction’s surprise final scene. The second two videos are handheld videos that show the entire ride, including the ending.

One more ride-through video offers a look at my very first ride on the Seven Dwarfs Mine Train. You might think I was hamming it up for the camera, but everything seen in the video below is my honest and true reaction to the stunning Audio-Animatronics and fun roller coaster action. 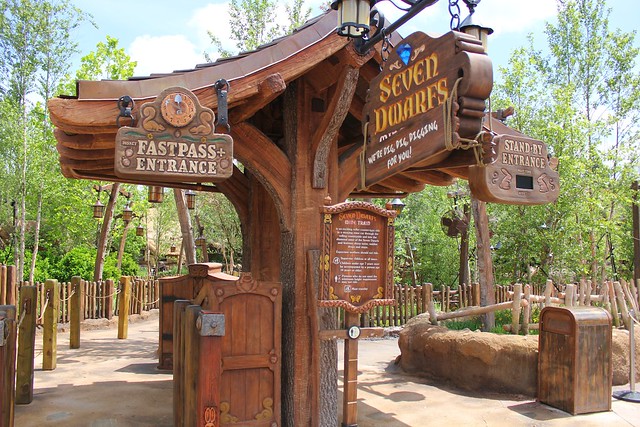 The Seven Dwarfs Mine Train takes up a huge plot of Fantasyland real estate, able to be circled by guests marveling at its sheer size. The grassy hill adds a further forest element to the park that was once in desperate need of foliage. And wrapping in and out of the hill drawing onlookers’ eyes are the winding mine cars, swaying ride vehicles that attract a lot of attention with their wonderfully crafted details. 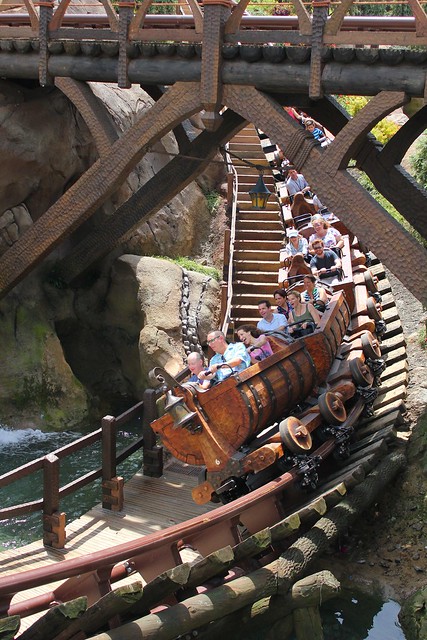 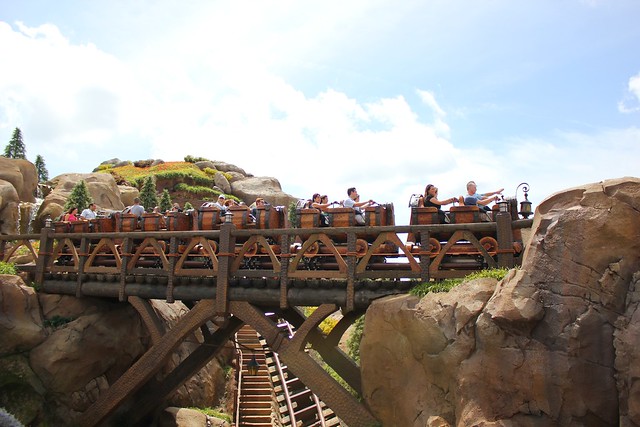 Stepping into the ride’s queue, guests encounter the Seven Dwarfs’ cottage, perfectly replicated from the 1937 animated film, down to every last detail. It’s an iconic moment that bookmarks the experience, seen from the front when entering and from the back when concluding the ride. 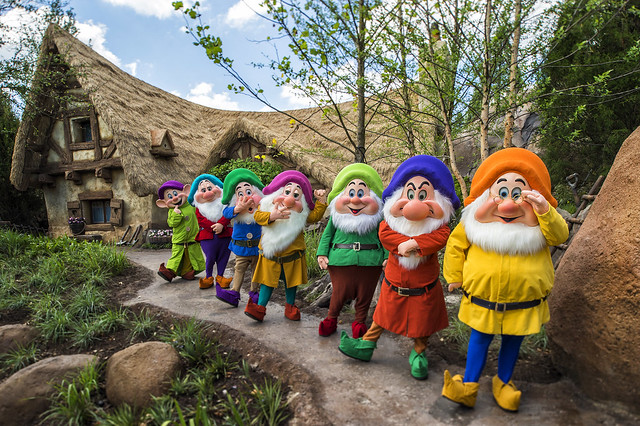 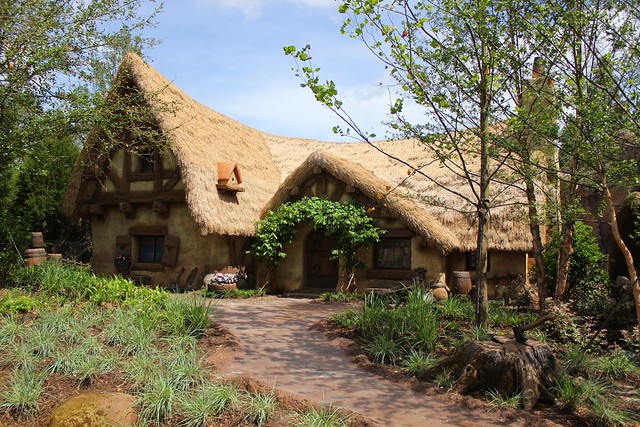 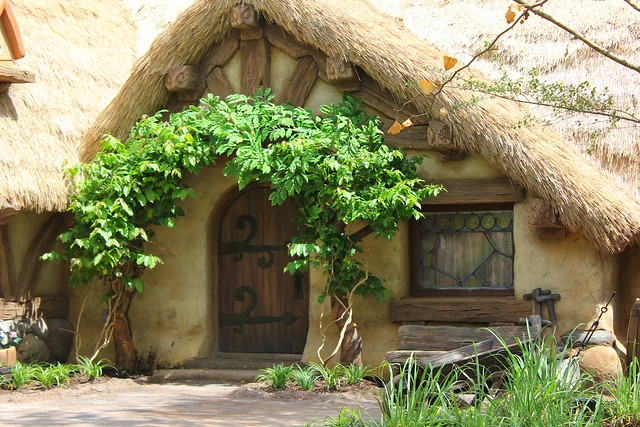 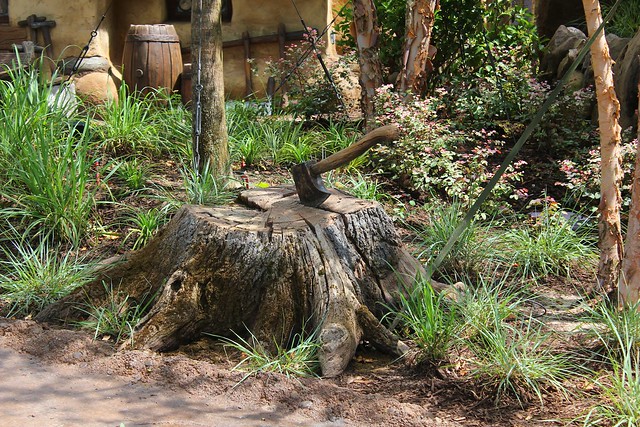 Guests walking the queue will also find several interactive elements to keep them entertained. The activities are definitely aimed at children, though adults won’t be able to avoid getting involved too – whether they like it or not.

The first interactive element depicts a row of floating gems coming out of the mine, enlisting guests’ help to sort them using large touch screens. It plays out like a rather simple tablet or phone game, enhanced by its surroundings but ultimately nothing too special. It’ll certainly hold kids’ attention. 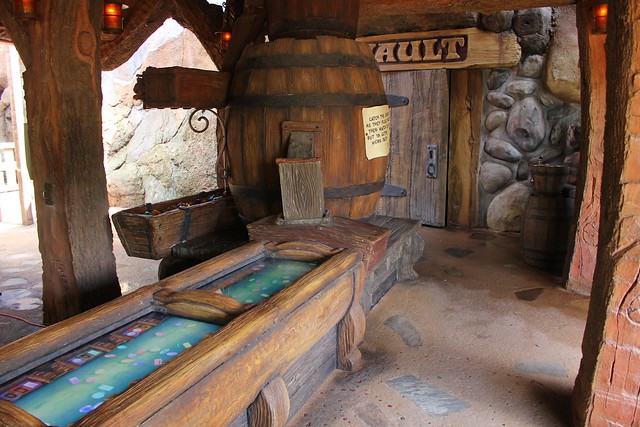 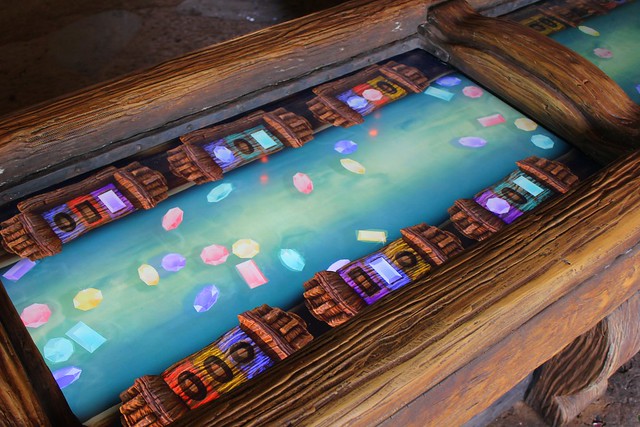 A nearby door marked “Vault” also offers an interactive opportunity with this prop that’s straight out of the movie. 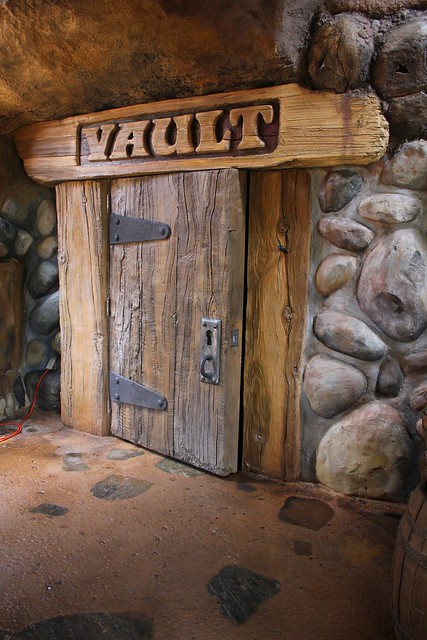 Then guests round the corner to find a row of carved characters reminiscent of those found on the dwarfs’ wooden pipe organ. Guests can continue to “wash” gems here, this time with real water. Holding a hand underneath each character results in an audible note, colored light, and a steady stream of forceful water splashing down onto a guest’s hand. The idea is to let the waterfall to the gems, but there are no doubt kids will be splashing around endlessly in here. 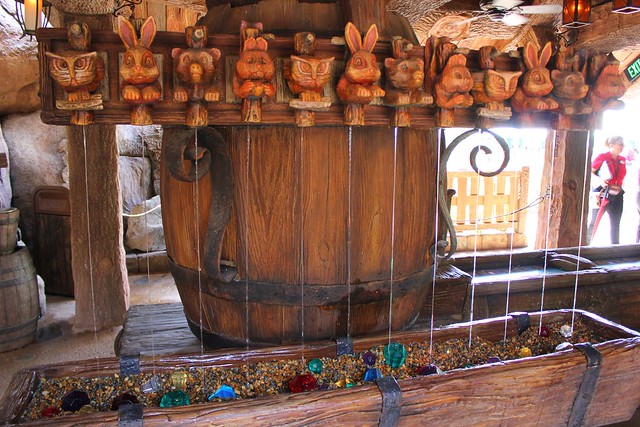 Finally, it’s time to board. A fairly dark loading area presents the ride vehicles themselves, into which guests can squeeze. The seats are definitely a tight fit, especially with two people sitting next to each other. Fortunately, each individual seat has a separate lap bar. 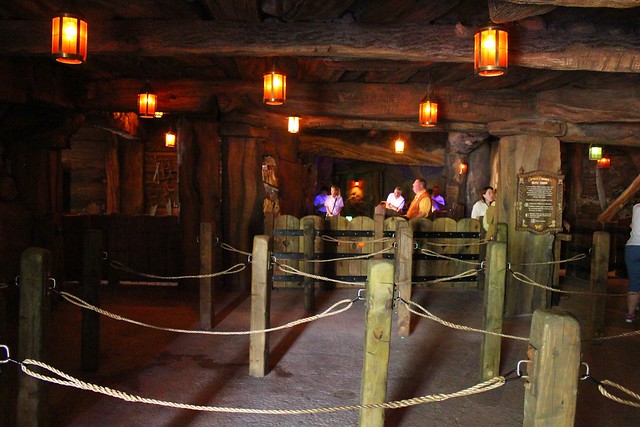 The ride begins quickly with some tight twists and banked turns making the fairly low speeds feel faster than they are. A lift hill passes some familiar “Snow White” elements, including vultures, while the sounds of “Hi Ho” are heard.

After a brief outdoor ride, guests find themselves entering the dwarfs’ mine – easily the highlight of the whole experience. It’s a thrill to be immersed into the dark, sparkling mine with lifelike dwarfs surrounding the mine trains. The advanced Audio-Animatronics Disney has created for this attraction are truly like no other, believable in every way. 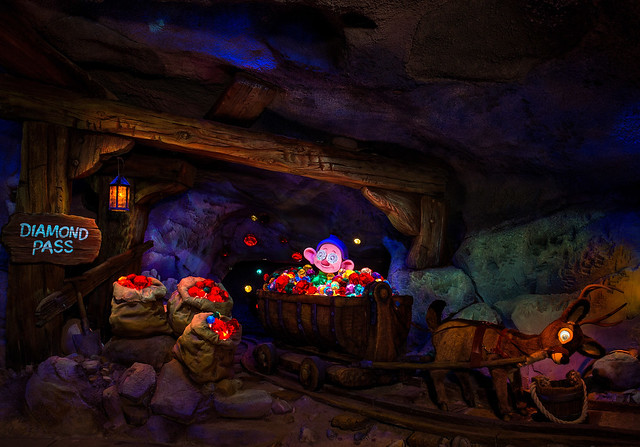 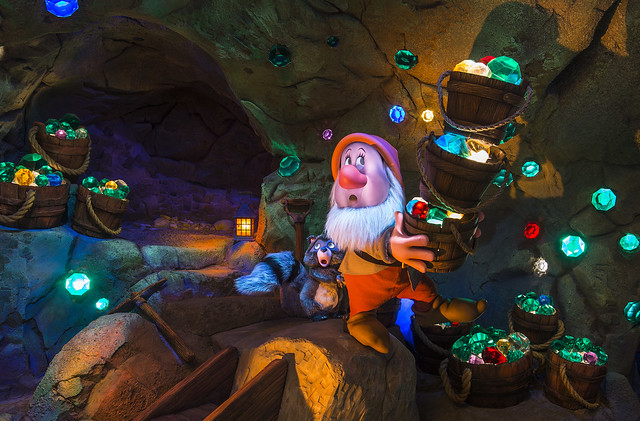 The ride vehicle slows down to enable guests to spend a lot of time marveling at these dwarfs working in the mine. They’re fully animated, not only in movement but also in facial expressions, brilliantly rendered and presented perfectly. The size of the Audio-Animatronics is surprisingly large and their proximity to the vehicles is surprisingly close to the cars. Illuminated in a classic black light dark ride style, these new dwarfs make every past incarnation of these characters look simplistic. They’re some of Imagineer’s best work.

And it’s not just the dwarfs, but animatronic critters along with the many twinkling gems throughout the mine. 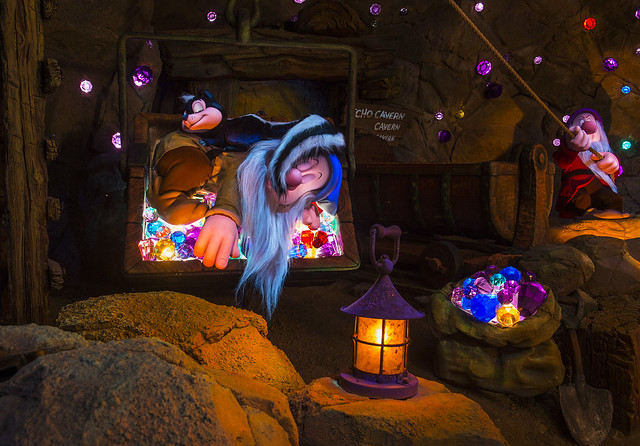 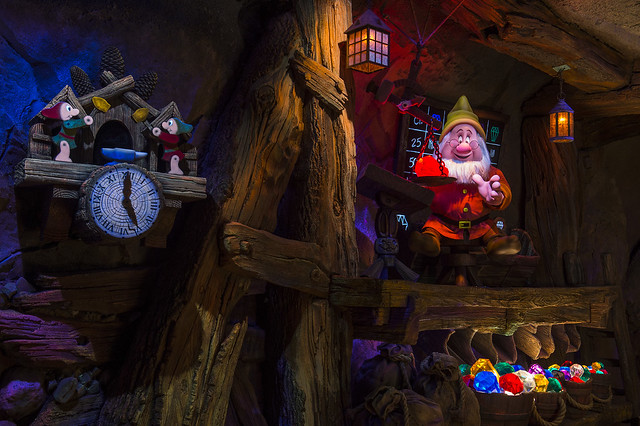 Though traditionalists might prefer fully physical faces, these new high-tech animated faces are certainly the wave of the future for Audio-Animatronics. They look that good.

Immediately past all the animatronic figures, silhouettes of the dwarfs march upward as guests rise up another lift hill, all while “Hi Ho” sounds loud. This is the sound of the big drop to come.

Though Seven Dwarfs Mine Train is a family coaster, the big drop is surprising, well, big. It’s an out-of-your-seat, pit-of-your-stomach moment, particularly when sitting in the back seat, and is the most fun part of the whole outdoor portion. 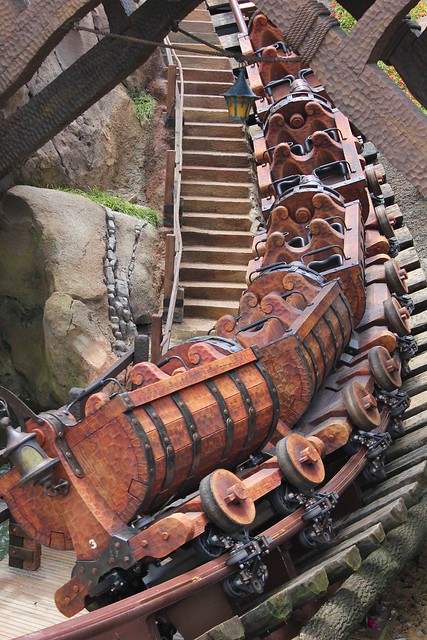 The much-publicized rocking ride vehicles unfortunately don’t add too much to the attraction. Guests sitting side-by-side will feel that much more than those sitting alone, but ultimately they really don’t sway very much.

After a few more turns, the backside of the dwarfs’ cottage is passed by, with some great surprises featuring returning characters from the former Snow White’s Scary Adventures ride, plus one more exciting new animated figure.

Disney wants to keep these last elements as much of a surprise as possible, which is why they are missing from the ride-through videos above, so those details won’t be spoiled here. (They’re out there, for anyone who cares to look, but it’s recommended to not find out until riding.)

The new Seven Dwarfs Mine Train is a completely fulfilling experience and a perfect way to finish off New Fantasyland. It’s not as thrilling as Big Thunder Mountain, but not as tame as the Barnstormer – somewhere in between – but far more entertaining having added the dark ride element to the roller coaster. Disney fans of all ages will surely love the whole new attraction, which will definitely need a FastPass+ booking because it’s definitely going to be popular.