Much mystery has surrounded Disney’s Haunted Mansion attraction since the first incarnation of the classic dark ride opened at Disneyland in Anaheim, Calif. in 1969. Over the years, the Mansion’s loose story has taken on a “life” of its own, with cast members and fans adding their own details in an attempt to connect the individual scenes featured inside.

Now, Disney is close to completing a new addition to The Haunted Mansion in Florida that will not only add new interactive fun features but also unite unofficial details with the official story of the ride.

Related: Haunted Mansion Empties as all 999 Happy Haunts Leave for a Much-Deserved Vacation

UPDATE: The Haunted Mansion interactive queue soft opened to guests today, at roughly the same time this article was posted. Click here for a detailed video/photo report from inside the queue.

On a basic level, new effects being added to the newly-expanded Haunted Mansion queue include motion, water, and sound. (Spoiler alert!) When the new area soon opens, guests will hear (and perhaps catch a glimpse of) a sea captain drowning, spewing bubbles in the process. Prior to his demise, the captain will spout off a few lyrics from the old “drunken sailor” song. It’s certainly a morbid effect, but appropriate for the overall theme of the attraction.

The sea captain has been a part of Haunted Mansion lore since early concepts for the attraction first considered him as its main character. His role was eventually reduced, ultimately being featured only in one large portrait that currently hangs in Walt Disney World’s “Doom Buggy” loading area. Now he’s being (re)introduced to guests who likely have never paid attention to his existence, making him a prominent figure in the experience. (Photo courtesy of Denise at MouseSteps.com)

In the Mansion’s finale scenes, three famous “Hitchhiking Ghosts” have been entertaining guests for decades. Unofficially, fans and cast members named these three ghosts Phineas, Ezra, and Gus. Over the years, Disney has acknowledged these unofficial names by occasionally including them on official Haunted Mansion merchandise.

Now, in a bit of “retcon” (retroactive continuity), all three names have been added to tombstones, along with a few others: 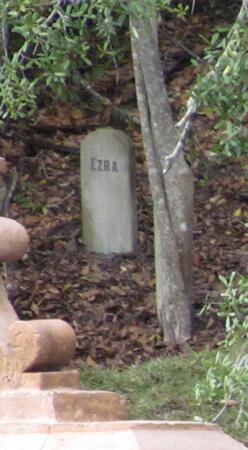 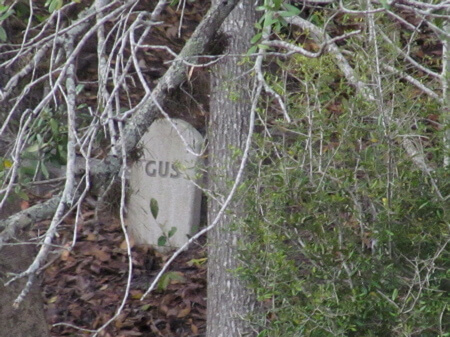 (Photos courtesy of Denise at MouseSteps.com)

Other highly-themed details added to the Mansion’s queue are cat footprints embedded in the concrete on the ground, possibly another reference to an early attraction concept for which a black cat was to be featured as a recurring character throughout the ride. Today, and since the Haunted Mansion opened, a black raven appears numerous times instead.

Elsewhere in the new crypt area, guests will find elaborate (and sometimes interactive) tombs referencing even more characters that have resided in The Haunted Mansion since its debut, including a few ghostly busts and even the graveyard band: 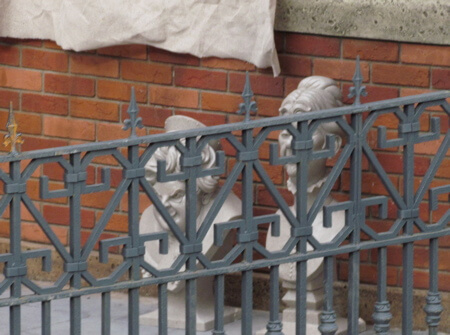 (Photos courtesy of Denise at MouseSteps.com)

But not all new details being added to the Mansion involve fictional characters. Many reference the real-life people who created the attraction. Prior to the new construction, engraved tombstones populated a graveyard next to the Haunted Mansion’s entrance. Each of these tombstones featured tributes to the Walt Disney Imagineers. The tombstones, which were nothing more than props, were removed during construction and have now been replaced by sturdier stone versions featuring the same inscriptions (and a few new additions).

The construction photos below, taken last week by Denise at MouseSteps.com, show the new versions of two of these classic tombstones, not yet placed back close to their original locations.

The first is the iconic “Master Gracey” tombstone, which pays tribute to Yale Gracey, one of the lead Imagineers behind The Haunted Mansion: 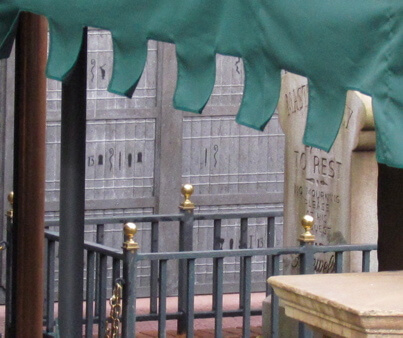 The second honors Imagineer Marc Davis, concept artist who essentially created the look and feel of The Haunted Mansion: 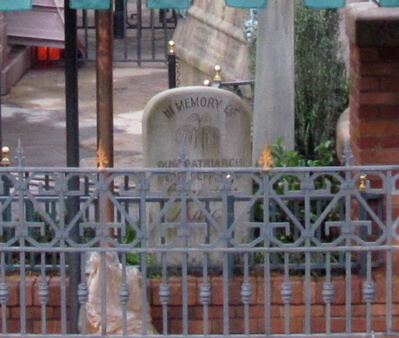 While these two (and many other) tombstones were part of the Mansion’s graveyard prior to the queue enhancements, other Imagineers and Disney Legends are also now being recognized throughout the addition. One of the new interactive elements in the queue is a pipe organ, similar to the one found in the ride’s ballroom scene. Inscribed on the organ is the name “Ravenscroft,” in honor of Thurl Ravenscroft, the lead vocalist of the singing busts in the Mansion’s interior graveyard scene.

When Walt Disney World’s Haunted Mansion last received a major update in 2007, it came in the form of enhanced effects and new scenes throughout the interior of the ride. The biggest modification to the Mansion’s overall story was the addition of Constance, the “Black Widow Bride,” creating a character that helps to link visuals seen during the journey from the initial “stretching” rooms, through the festive ballroom party, and ultimately into the attic. (Click here for a video of what the attic scene was like before the 2007 update.)

Disney’s motivation behind adding new elements to The Haunted Mansion is part of an ongoing effort to dramatically improve the experience of standing in line throughout their theme parks. Enhancements are being made attraction-by-attraction to create what Disney is calling “scene one,” offering guests entertainment and fun to help them forget that they’re waiting to get onto a ride. Disney has already added interactive elements to the queues of such popular attractions as Space Mountain, Soarin’, and The Many Adventures of Winnie the Pooh to great success and plans are to continue retrofitting additional scenic and interactive elements into additional attractions, even including the experience of meeting Mickey Mouse.

But with any change to a classic Disney attraction, these queue additions have not come without Disney fan apprehension. In the early planning years of the first Haunted Mansion at Disneyland, Walt Disney said, “We’ll take care of the outside, and let the ghosts take care of the inside.” In other words, the Mansion was intended to look well-kept and rather unassuming on its exterior, leaving the spooky sights to be revealed within. The addition of Madame Leota’s tombstone in 2001, which features the animated face of the famous disembodied seance spirit, began to abandon this notion, hinting to waiting guests what they could expect inside. 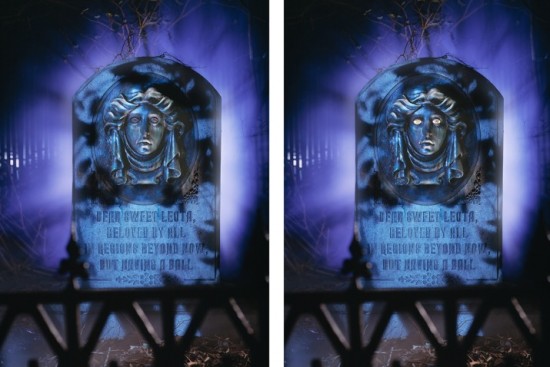 Leota’s tombstone (which even with the new additions still sits directly to the left of the attraction’s entrance) was a far more subtle change than the newly-added crypts, which prominently feature a number of other ghosts already represented inside the Mansion. Some fans wonder if revealing too much upfront will ruin the surprise of seeing the ghosts inside. For instance, the organist’s new tomb outside is adorned with a row of ghostly heads which mirror the spirit heads that rise up from the organ in the attraction’s ballroom scene. Additionally, the artistic style utilized on some of the new elements, particularly the busts, has been seen by some as too “cartoony.”

However, those who look to the Mansion’s roots will find the new queue additions stay completely in line with the playful nature of the attraction. A quick glance at any Haunted Mansion concept artwork created by late Disney Legend and Imagineer Marc Davis reveals that the intention was always to populate the ride with “grim grinning ghosts,” who are simply there to “socialize” (as the attraction’s famous graveyard song lyrics go). Despite its deathly theme, The Haunted Mansion has always featured a comedic tone, combining a certain Disney quality with an obviously grim topic. It’s a “haunted” attraction filled with a joking “ghost host” narrating through scenes that include a wedding, birthday, tea party, and even a jazzy jamboree. Even the hitchhiking ghosts who “follow you home” have big grins on their faces. (And even those ghosts appear to be getting an update as well.)

It appears that today’s Walt Disney Imagineers are finding much of their inspiration for “plussing” this classic Disney attraction by looking at its history and back to those who originally created the attraction. The new queue area has not yet opened to the public but limited cast member previews took place over this past weekend produced praise for the new area, calling it high quality with a lot of attention to detail. All the new construction actually adds very little new space to the existing Haunted Mansion queue, instead of creating additional elements that will enhance the overall guest experience of visiting the classic ride. When the queue expansion soon opens, the decades-old story of The Haunted Mansion will have officially been extended, bringing together unofficial fan-favorite tales with gone-but-not-forgotten elements from the past, all combined with today’s technology to create a more complete guest experience.