'Willow' Finale Recap - 'Children of the Wyrm' - Inside the Magic 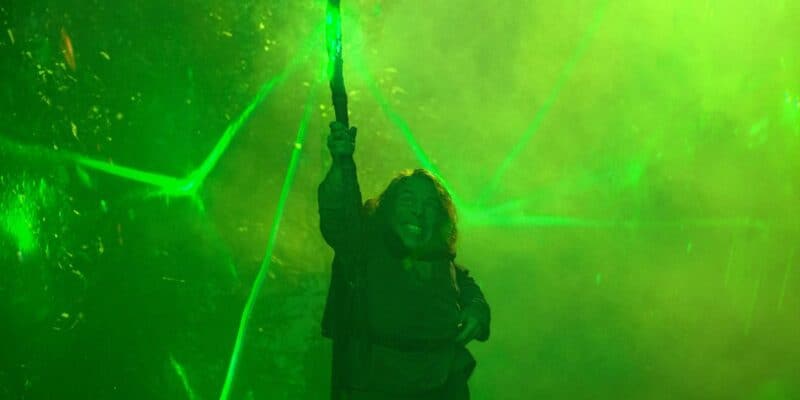 After eight episodes of epic adventure, our Willow (2022) heroes have made it to the season finale. But did they manage to stop the evil Crone?

We open where the last episode closed, with Airk (Dempsey Byrk) emerging transformed from his encounter with Lili, revealed to be the villainous Crone (Rosabell Laurenti Sellers). Kit (Ruby Cruz) and Elora Danan (Ellie Bamber) take it in turns to try and talk some sense into Airk, but he’s well and truly drunk the Wyrm’s Kool-Aid.

Airk reveals that he knows his love Dove is the prophecized hero Elora, and begs them to be introduced and listen to the Crone herself.

The rest of the group, including Jade (Erin Kellyman), Graydon (Tony Revolori), Boorman (Amar Chadha-Patel) and Willow (Warwick Davis) are stood by the waterfall that Kit and Elora leapt off last episode.

One by one, Willow tells them their best qualities, and each take the dive. He makes to leave back across the Shattered Sea, returning to his daughter Mims.

In the Immemorial City, Lili reveals herself to the party as the harbinger of the Wyrm, wanting to awaken him and bring about the world’s end. She forces Kit and Elora to enter an ominous glowing portal within the temple, and appear within an enchanted grove. There Kit reunites with what appears to be her mother, Sorsha (Joanne Qualley), and Airk tells Elora it is their wedding. Elora says it is a beautiful lie, but allows herself to be led away to talk.

Graydon, Jade and Boorman have made their way into the city as a huge oncoming storm approaches.

Inside the enchantment, Sorsha is telling Kit that she is sorry for being wrong and trying to mould her into a queen. Airk and Elora are talking about her magical powers, and he suggests that the Wyrm could take them both back to a simpler time, before she discovered her fate.

The illusion is broken for Kit when she hears her father Madmartigan (Val Kilmer in the original 1988 movie) speaking to her in her mind, warning her of the danger and telling her she is Elora’s shield and sword.

The Crone tells Kit that she is too late and the great awakening has already started, turning our heroine to stone.

At Airk and Elora’s apparent wedding, we reach the big kiss moment, overseen by the Crone herself, when Elora denies him. She’s timed it well, coinciding with Willow’s heroic return to save the group. He saves them all from the trap with a magical spell, and the Crone’s true hideous form is revealed, the Gales appearing to defend her.

Graydon steps up to try and defeat the Crone himself, but for all his courage he fails. The Crone tosses his wand and blasts him into the portal, seemingly disintegrating him.

Elora summons her power and blasts the Crone away, out of the temple. Willow stands by her side and says that’s where he belongs.

Boorman cedes the Kymerian Cuirass and it’s power to Kit, saying he recognises now that she is the one who truly use it. Airk launches into battle against Kit and Jade, convinced he can be king.

Willow says Elora needs to draw on her self belief to truly defeat the Crone, and she manages to fight back against the evil magic. The Crone explodes and vanishes, hopefully for good.

Kit activates the Kymerian Cuirass with the Lux and the armor grows to cover her body and imbue her with strength. She manages to defeat her possessed brother, and talks him back to the light.

Boorman steps out to join the rest of our heroes outside the temple, holding Graydon’s flute which he gives to Elora.

Willow says the Wyrm is still waiting for them, but they will be ready for it in turn.

Inside the temple’s portal, we see Graydon wake up on the battlefield from Elora’s visions. He sees Elora in battle dress, atop a mound of corpses, clearly the Wyrm in disguise. They ask for Graydon to help them fight back. And the screen cuts to black.

What did you think to the Willow finale? Tell us in the comments below.