'Willow' Episode 7 Recap: "The Shattered Sea" - Inside the Magic 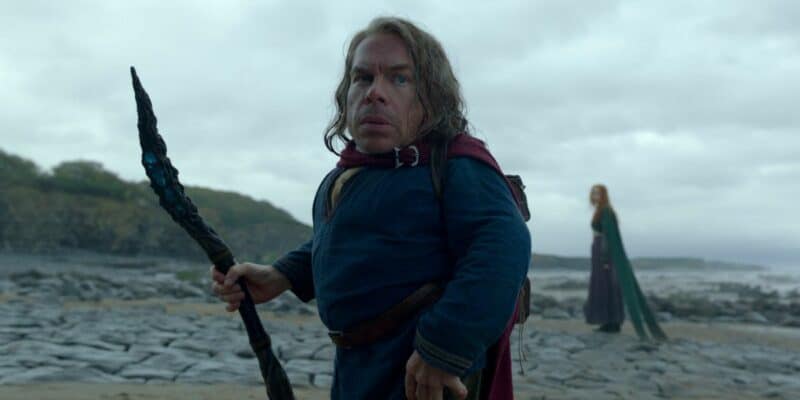 We are just one episode away from Willow‘s (2022) grand finale, and our heroes are closing in on their destiny, with just one place left in their way: The Shattered Sea. How will they fare on their crossing?

We open with Airk (Dempsey Byrk) and Lili (Rosabell Laurenti Sellers) talking about the Immemorial City where they are both seemingly trapped. Lil reveals she is originally from Cashmere, and Airk shares his royal status.

She repels his flirting and teases him for confessing his princedom. As they talk, he hears Kit’s (Ruby Cruz) cries from the Skellin cavern where she is drowning.

In Skellin, we see Elora’s (Ellie Bamber) magic work to pull Kit out of the floor and to safety. The group run for the exit.

Boorman (Amar Chadha-Patel) ponders trying the magical Lux key which activates the Kymerian Cuirass he is wearing, but decides he has to wait for an appropriate moment.

At the shores of the Shattered Sea, they find a cabin, owned by elderly Zeb (Julian Glover). Zeb tells them he has a ‘Silt Sleigh’ for traversing the sea, pulled by a captive mudmander.

After making them dinner, Willow identifies Zeb as being from Cashmere. He tells how he actually was a Paladin, who may have either been one of three sent to rescue a princess from the Immemorial City long ago, or one on a quest for an enchanted pool. His time in the ocean has made him lose his mind. He said the place made his party turn on one another and the sea goes on forever.

Back in the city, Airk follows Lili inside to the entrance to a glowing chamber, but refuses to go within. She tells him of the Order of the Wyrm in Cashmere, a malevolent sect which kidnapped the princess — her.

In the cabin by the sea, Zeb is revealed to be the Dag (Claudia Hughes) in disguise, the illusion-casting member of the Gales. It was trying to keep them here. Graydon (Tony Revolori) commandeers the silt sleigh to help the group make their escape.

They are pursued by the flying Dag and the Doom (Daniel Naporous), riding a mount. Boorman still refuses to use the Cuirass. Graydon takes out the Dag in a magical explosion. Jade (Erin Kellyman) puts down the Doom with her blade, but not before it grips Elora and gives her another vision of the Crone.

When they stop, Graydon feeds the mudmander and names him Kenneth after a character in a novel he is writing. He reveals to Willow (Warwick Davis) that he wielded his flute as a wand on instinct. Willow says magic is within Graydon.

Willow and Elora train in front of a stunning pink sky. He teaches her how to defend herself and the importance of finding her breath and rhythm.

Kit asks Jade to spar with her too, this time without holding back, so she can truly test herself. And so begins a training and travel montage of the group sparring and crossing the sea. As it comes to a close, we see Kit confess that she loves Jade and the pair fall into an embrace.

Willow is still training Elora, trying to get her to embrace the parts of herself she is ashamed of in order to conquer them. As Elora thinks on it, she has another vision of the Crone and blasts Willow with a powerful Pnakotic spell, learned from her time in Nockmaar.

Back in the city, we see Airk and Lili kiss after a conversation about defying expectations or establishing what they are. She confesses to him that she has actually been in the city a very long time; that in fact, she is the one who summoned him there. We see him try to run.

Back with the group, we see Kit tell Willow about hearing her father Madmartigan (Val Kilmer in the original 1988 film) during her time in the vault in Skellin. Willow tells her about the Wyrm, the sinister entity which lives below the world, sleeping and consuming magic.

He has a vision of his daughter Mims (Annabelle Davis) in trouble. We see Graydon with Kenneth, and Elora asks him what is wrong. He says Kenneth is getting increasingly depressed the further they go. Elora thinks its because they are closing in on their destination.

During one campfire, Kit says she has lost track of how long they have been out on the water. Willow says he misses Mims.

In a later conversation, Elora tells Kit she feels bad for stopping her seeing her father in the vault. Kit says she saved her life. Elora tells her she doesn’t believe Madmartigan did choose her over his own family, and Kit confesses she is jealous of Elora’s life and relationships with people.

Boorman decides to try the Lux but the Cuirass fails to activate. Willow is having another vision of Mims at the same time, seeing her skeletal as she tells him they let Silas — who died in an earlier episode — back into their home, not knowing he was deceased and a trick.

The vision is interrupted by Boorman reprimanding Graydon for setting Kenneth free. Elora says the group has to walk.

We see Airk in the building within the city, dragging himself to the pool of glowing water within. Lili pours water into his mouth as he says he will do whatever she wants.

Everyone in the party is ready to give up as they discover a waterfall blocking their way. Boorman tells Graydon he believes he is a nobody. Graydon tells Elora he loves her. And Elora tells them Willow’s vision of her dead in the Immemorial City with the broken wand, the reason anyone was reluctant to train her in the first place. It’s a moment of confessions.

Willow says he is not everything he should be and Elora says she doesn’t want to be the savior. It’s down to Kit to step in and rally them, saying she is giving them her fear’s power — or something — to keep them motivated. She and Elora hug before tipping themselves into the waterfall, rightly recognised as the portal to the Immemorial City.

They arrive at the city, right to the door where Airk has spent most of the season. As rock music plays, the doors open and reveal Airk with that most terrifying of character changes: a hair cut.

What did you think to Willow‘s penultimate episode? Tell us in the comments below.