'Willow' Episode 6 Recap: "Prisoners of Skellin" - Inside the Magic 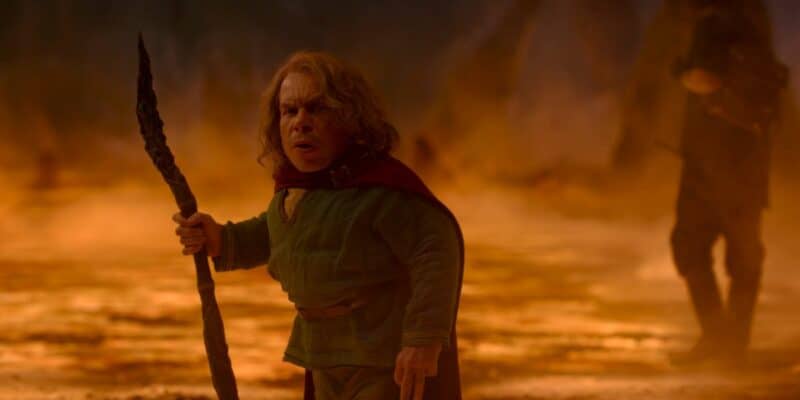 Last week’s episode of Willow (2022) ended with Jade (Erin Kellyman) finally confessing her feelings for Kit (Ruby Cruz) under the sun dappled trees of the Wildwood. That moment was cut short by trolls snatching Kit and disappearing into the treeline. This week, our adventurers try to rescue them from the dread mines of Skellin…

We open with Airk (Dempsey Byrk) in the Immemorial City still, being whispered to by the Crone who is attempting to tempt him to the side of evil. He refuses and instead tries to leave the vast, empty cityscape.

Kit and Willow (Warwick Davis) are being led deep into the caves by the trolls. It’s a vast complex with industry, whips and screams echoing through the mountain’s interior. They are thrown into crow cages alongside one another prisoner, who tells them he has been there a decade, and claims to be Madmartigan himself (Val Kilmer in the original 1988 film).

A troll chief administrator Sarris (Tom Wilton) enters the prison chamber, and can tell they are not Wildwood natives due to their clothing. Kit tells them she is the princess of Tir Asleen.

Outside Skellin, the rest of the gang, led by Boorman (Amar Chadha-Patel), are plotting how to infiltrate and rescue the pair. They decide to enter as a group and use Boorman’s knowledge of the caves to navigate.

Once inside, Elora (Ellie Bamber) and Graydon (Tony Revolori) try to resolve their unresolved issues while the rest of the group fights the trolls. The emotional distress causes the caves to begin to quake, Elora’s abilities untamed and causing havoc on the mountain’s structure.

In the prison, Willow identifies the man claiming to be Madmartigan as actually being Allagash — and played by none other than Christian Slater, the latest in Willow’s trend of guest stars. Allagash claims it was Boorman who betrayed Madmartigan in the past.

Elsewhere in the mine, Scorpia (Adwoa Aboah) is looking out onto those captured by the trolls, determined to do something about it. Boorman explains the trolls use the prisoners to distil a substance which gives them enhanced abilities, similar to that which leaked from the possessed Commander Ballantine (Ralph Ineson) or Graydon earlier in the series.

Scorpia says she must try to rescue as many people as possible while the others go after Elora and Willow. To her sister Jade she gives an ultimatum: once all this is over, she will have to pick between her friends and her new-found family.

In the prison, Allagash manages to break out of his cell with Kit’s help, but promptly nearly falls to his death, saved only by a last minute grab from the Tir Asleen princess. He reveals that Madmartigan is deeper in the cave system, inside the tomb of famed explorer Wiggleheim.

The rest of the group are now disguised as trolls, inching their way closer while Elora’s anxiety increases the cave tremors. Graydon is drafted in by another troll to go help with a clean up on a different level and leaves reluctantly.

As the group continues along a rickety path, a near-fall from Jade means Elora drops Cherlindrea’s Wand to the bottom of the cavern.

As they close in on the tomb, Allagash reveals that Madmartigan returned to him after 20 years apart to recruit him for the mission to find the Kymerian Cuirass. The reason they are headed to this tomb is that it was believed to have been found by Wiggleheim, who took it to his grave.

Allagash says Boorman betrayed their group and took the Lux, the key to unlocking the cuirass’s power. He says he assumed Madmartigan’s identity to buy him more time in the tomb and hold off the trolls, who only cared about Madmartigan and not his fellow party members.

Boorman is saying he can fix his ‘biggest mistake’ when the two groups are united at the tomb. It turns out he was leading Elora and Jade there instead of directly to the prisoners in the hopes of using the Cuirass to save them all. Elora confesses to Willow she dropped the wand, and Boorman insists it was Allagash who betrayed Madmartigan’s group, not him.

Allagash gets Kit to help him open a door mechanism which opens the tomb entrance, hidden within an optical illusion. A giant head of Wiggleheim begins to speak, challenging the party to get two riddles right for entry.

Elora solves the final answer and the head’s mouth opens, revealing the vault and a glowing portal within. As Allagash and Boorman tussle outside, Kit enters, discovering her father’s sword. She then hears his voice calling to her from within the portal, asking her to help him. As she begins to step toward it, Jade and Elora plead with her to not go and pull her out of the vault.

Outside, Allagash has fled with the Lux. A party of trolls has turned up to stop the adventurers. Graydon reveals his disguise and joins them. As things begin to look dire, Allagash returns to ambush the enemies and buy the group a chance to run. He points them in the right direction, a small gateway, and tells Kit something Madmartigan would want her to know.

He says her father went through the portal to protect the world from what’s below because he felt confident his family would protect what was most important up here: Elora Danan. He shuts the gate and holds off the trolls so they have time to flee.

At the base of the cavern, Boorman questions whether Scorpia will have made it out, but Jade confidently says she has — she can feel it.

As the group begin to run towards the exit across a sort-of frozen floor, one which absorbs falling debris and then ices over again, Kit decides to confront Elora about her unchecked powers, and the fact that her father always picked her as a priority over his children. It’s the same conversation Elora has been hearing echo up from below throughout the episode.

As Kit finishes her tirade, she plunges through the floor and it seals up above her. Willow tries to blast the floor open but can’t. Elora finds Cherlindrea’s Wand from earlier and picks it up, moving to use it.

Back in the Immemorial City, Airk’s escape attempt has led him to a ravine. As he scales it, he looks out and back to the city itself. He can’t escape. Dehydrated, he drinks from a pool of malevolent looking liquid outside the place he started, where the Crone tried to tempt him inside.

From within the building, he hears a woman’s voice. Venturing inside, he finds her (identified as Lili in the credits, played by Rosabell Laurenti Sellers) inside a cell. She asks if he brought her here. He says he didn’t, but the same people must have kidnapped them both. She approaches the bars and asks if he will let her out, as ‘Good Vibrations’ by the Beach Boys begins to play and the screen cuts to black.

Where do you think the final two episodes of Willow will go? Tell us in the comments below.

Comments Off on ‘Willow’ Episode 6 Recap: “Prisoners of Skellin”