'Willow' Episode 3 Recap: "The Battle of the Slaughtered Lamb" - Inside the Magic 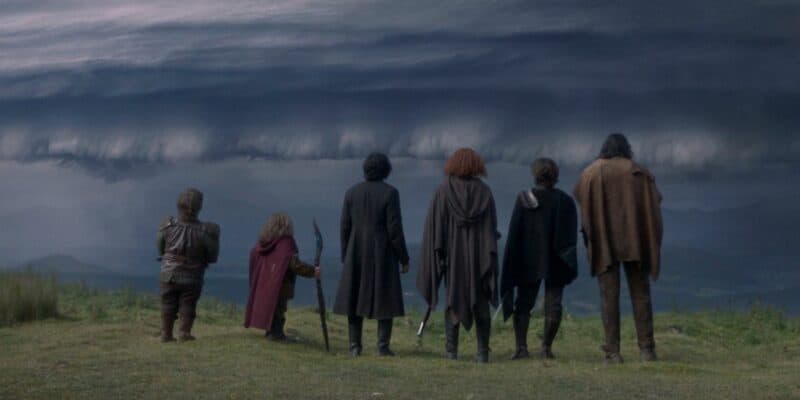 This week’s episode of Willow (2022), “The Battle of the Slaughtered Lamb”, sees a star of stage and screen make a cameo and a return to a familiar place…

The episode opens with Boorman (Amar Chadha-Patel) telling Kit (Ruby Cruz) the story of Thuul, the heir to the Kymerian Empire, whose mother made him the Kymerian Cuirass to protect him from an attempted coup by his brother. The armor is activated by a device known as the Lux Aeterna.

Kit, impatient to find out news of her father, Madmartigan (Val Kilmer in the original movie), asks him to hurry up. Their story time is interrupted as the rest of the group realize Elora Danan (Ellie Bamber) has gone missing. We saw her being kidnapped by the possessed Commander Ballantine (Ralph Ineson) at the end of the last episode, dragged away just as the seed she had been attempting to enchant finally showed some signs of growth.

Kit, part of the search party, stumbles across Elora’s now-grown berry bush, just as Jade (Erin Kellyman) finds Ballantine in the act of stashing the bound Elora on his horse. She can tell something in wrong, knowing the man who has essentially been her father is acting strangely.

The rest of the group join her in confronting Ballantine, who drops the ruse of being an ally and surprises them with an attack from himself and his similarly-possessed men.

During the battle, Graydon (Tony Revolori) attempts to free Elora from the horse, but some hesitancy to get stuck in costs them time. And before they know it, a cursed fog has descended on the battle and their opponents have fled.

Graydon laments his failure to save her and says he recognises what was wrong with Ballantine and his compatriots: they were possessed by the Gales, and bad magic is eating away at them.

As the group head off in pursuit, they see an incoming storm. Willow (Warwick Davis) identifies it as the evil Crone’s dark magic at play, part of their plot to banish Elora’s soul and seal the world’s fate forever.

Jade and Erin are talking. Erin, headstrong, believes she can charge after her brother alone and doesn’t need protection, but Jade reveals that for years, she has been letting her win during their training sessions and that she is not fully prepared for the battles to come.

Back with Ballantine’s group, Elora manages to break free of her binds and run for the nearby forest. Within the trees, she finds a sunkist grove and two woodswomen, Hubert (Hannah Waddingham) and Anne (Caiomhe Farren).

After Elora regales them both with the tale of how she is Elora Danan, the pair pledge their loyalty and lives to her in the fight to come, ‘ready to answer the call against the forces of darkness’. They will have to honor that pledge sooner than they realize, when Ballantine shows up.

He looks far worse for wear, the evil infection eating away at him. Hubert steps up nobly to defend Elora, and quickly bests Ballantine with her axe, Roargoth. But Ballantine is no longer fully mortal, and surprises her with a sword to the stomach. As Hubert falls, Anne and Elora flee.

They reach the river and are met by Ballantine’s men. Anne makes a run for it and Elora screams for mercy for the woodswoman, but she is cut down. Ballantine says Elora just needs to submit to them to save further bloodshed.

Willow and the rest of our heroes decide to split up to try and catch up with Elora and her kidnappers. Kit and Boorman head down the Perilous Pass to the Slaughtered Lamb, an old inn, while the others take a longer route around.

During the journey, Boorman tells Kit that the cuirass isn’t a weapon, it is a shield. He believes Madmartigan may still be alive.

In the other party, Graydon questions how capable Willow still is at sorcery, as he seems to have been reluctant to demonstrate his abilities. In conversation with best friend Silas (Graham Hughes), Willow reveals he has been holding back his powers for the fight to come.

At the Slaughtered Lamb, Boorman and Kit find a ruin. Boorman reveals that he and Madmartigan confided in the inn’s owner about their hunt for the cuirass, and that that person was the only one they knew they could safely speak of it to. Within a subterranean passage, the pair find a well. Boorman is lowered down it and asks Kit to keep watch for wererats while he searches.

Ballantine and Elora have reached the inn’s ruins too. Elora refuses to go up the path, and her magic touch repels and scolds one of the guards. She has a failed attempt at a magic spell, but her friends show up just in time.

Within the ruins, Boorman finds what appears to the the Lux Aeterna, the key to activating the cuirass, stashed within a wall. Up above, Kit is facing down a two-headed were-rat. Boorman and Kit run from a stampede of the horrific creatures, bursting out of a tomb wall and back into the fight.

Outside, a battle has begun. Willow insists on trying to get everyone into the cart as he has some explosive wax they can use as a weapon, but at that moment, a lightning bolt hits their transportation and ignites it in a huge explosion.

As the fight rages on, Silas takes a blow from one of the fighters and is thrown against the cliff wall. Willow sees this and decides to finally deploy his magic, shouting ‘Avagdu!’ and blasting their enemies away.

Willow finds Silas, who dies in his arms, saying he was glad he could do so protecting his best friend. Willow’s magic appears to have blasted away Ballatine’s possession, but the man is dying too. He asks Jade to kill him, but before she does so, tells her she has to protect Elora and her friends.

The group decide to advance on by foot, Willow exhausted by his use of magic. Graydon was similarly injured in the fight. As they question where they are, Willow reveals he knows. They are in Nockmaar, the ancient stronghold of the evil Queen Bavmorda.

What did you think to Willow episode three? Tell us in the comments below.

Comments Off on ‘Willow’ Episode 3 Recap: “The Battle of the Slaughtered Lamb”