'Willow' Episode 2 Recap: "The High Aldwin" - Inside the Magic 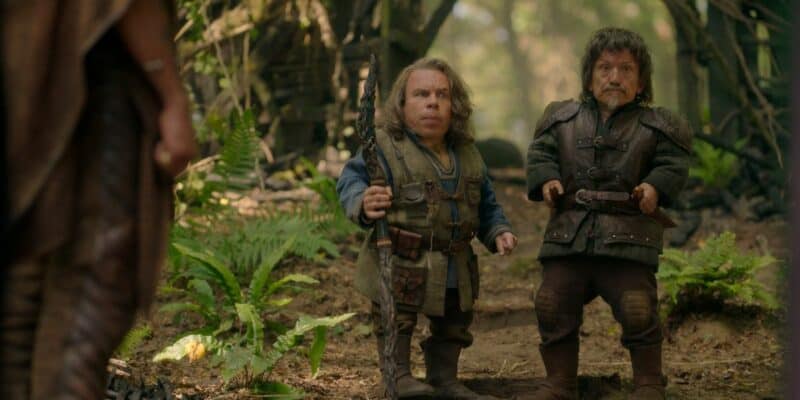 The second part of Willow’s (2022) two-episode premiere, this episode develops the dynamics of the group further, now that they know someone who could potentially be Elora Danan (Ellie Bamber) moves among them.

The episode begins with a flashback to the past, and Willow (Warwick Davis) is rocking a goatee. We see him meet Sorcha (Joanne Whalley), and attempt to convince her that young Elora needs to be training in her magical abilities. Sorcha disagrees, and delivers a burn: she says Elora would need a top sorcerer to teach her, and Willow will never be one, even if he is now the High Aldwin.

Sorcha also reveals that Madmartigan (Val Kilmer in the original 1988 movie) is on a quest to find the Kymerian Cuirass, an armor piece which could help defeat the Crone without Elora having to fight.

In the present day, Willow takes the unlikely band of adventurers to meet his fellow Nelwyns. They live underground and first to greet them is Willow’s daughter, Mims (Annabelle Davis). She has a brief reminisce with Elora about the moment she found her as a child.

Willow organises an assembly in which he greets his people and introduces them to Elora in person. He consults the bones and determines that she has come to bring balance, outweighing the evil of the Crone and the Gales.

A member of the crowd calls for a test — they want her to take part in the finger test, where Willow asks her which finger has the most power. She chooses the middle one, but Willow says she failed; the correct answer is her own, demonstrating faith in her own abilities.

Down a deep gorge, we see The Lich (Vitas Le Bas) communing with the Crone. He tells her Elora has revealed herself, and he has set an agent upon her trail.

That agent is Commander Ballantine (Ralph Ineson), who was cursed during the castle battle last episode and is now leading a furious pursuit.

Elora and Willow have an argument. She is desperate to set off to find the kidnapped Prince Airk (Dempsey Bryk), but Willow insists on her completing her training.

Later, Willow is pondering the issue and what to do when Mims approaches. She says if he truly wants to fulfil his duty to protect the Nelwyn, he must accompany them on their quest.

In the meantime, Elora has vanished. The group have been too involved in debating the truth of her identity to even notice. Boorman (Amar Chadha-Patel) doesn’t care, while Kit (Ruby Cruz) is a sceptic and Graydon (Tony Revolori) is a staunch believer. Jade (Erin Kellyman) has a sense of duty to the prophecy. When they hear of Elora’s disappearance, they and the Nelwyn mount a search.

During the search, Willow has memories of finding Elora as a child, and his duty to protect her. She is in the river, doubting herself and her abilities. Willow says she has got to have faith in the power within herself. She wants him to join them and after some thought, agrees — but only if Elora will listen to his instruction.

As the group prepare to set off on their long journey to the Crone, Mims gives her father a tearful goodbye.

Commander Ballantine and his men have found an old camp. The group is two days ahead of them. As one of his fellow knights asks to rest, Ballantine reveals his new allegiance and dives upon the shocked soldiers. (Has Ralph Ineson ever not played a villain? The man emanates malevolence. Excellent casting.)

Back with our heroes, Kit and Boorman are talking on the road. He reveals he is a treasure hunter, and what’s more, spent five years on the trail of the Kymerian Cuirass with Kit’s father Madmartigan as his squire.

In the back of the wagon, Willow tries to teach Elora how to use magic. He tells her of Sorcha’s decision to keep her identity secret and magic from the land, but his lesson is cut short by Elora’s travel sickness.

Around the campfire later, he tries to teach her a spell to grow some berry plant seeds, but Elora’s impatience comes through once more. She is in a hurry to advance to battle magic, spells she can use to rescue Airk. She even attempts to grab the magic artifact, Cherlindrea’s wand, that Willow brought with him from home.

There’s another flashback to Willow meeting Elora as a young girl. He tries unsuccessfully to convince her to come with him back to the Nelwyns, where he could teach her. Instead, she is scared, and Sorcha hears the commotion. She confronts Willow and in a frustrated rage, he tells her he will never return to help her or her kingdom.

In the present, Commander Ballantine has reached the Nelwyn village. Mims and the others are hiding from them, but she decides to step out and greet him. He asks her where Willow and the others are, and she attempts to throw him off the trail with a false path. When another soldier discovers wagon tracks heading a different way, exposing her lie, the Nelwyns vanish.

Elora continues to struggle with her magic, and is left alone to practise after Willow loses patience with her. Graydon approaches and offers to help her with the book, lifting her spirits by telling her she is important and only has to look at how she inspires the group around her to action.

In his tent, Willow is considering turning back. Fellow Nelwyn Silas (Graham Hughes) asks him why, and Willow reveals an ominous vision of carnage. He wakes on a battlefield and finds Elora dead: for the world to be saved, she has to sacrifice her life.

Elsewhere, Kit tells Boorman that she wants to know everything about her father.

And in the grove where she was practising her growth spell, Elora awakes — before being grabbed and dragged away by Commander Ballantine, who has finally caught up to them. Where she was sat, a small plant begins to sprout…

Have you watched the first two episodes of Willow? Tell us in the comments below.

Comments Off on ‘Willow’ Episode 2 Recap: “The High Aldwin”