The Fantasy Returns: Recapping 'Willow' Episode 1 - Inside the Magic 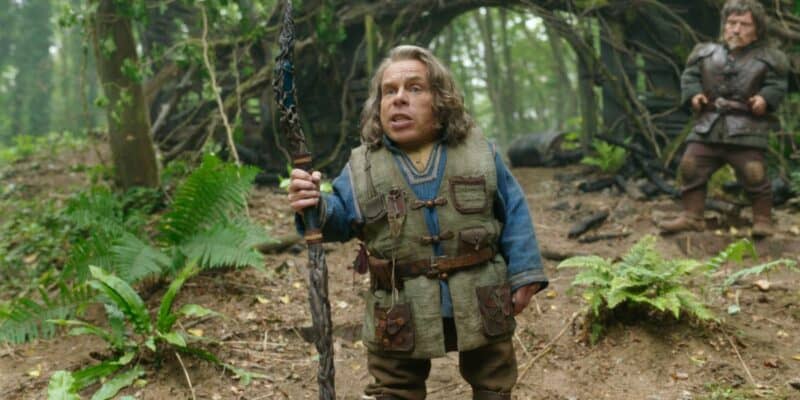 Willow (2022) is the continuation of the classic 1988 movie of the same name. Set in a rich fantasy world, it started life as a story by George Lucas. That story continues now on Disney+ with “The Gales”, the first episode of this new mini-series.

The show opens with a storybook recapping the events of the film. A girl, Elora Danan, was born and prophesized to become the new empress and bring about the downfall of a wicked queen, Bavmorda of Nockmaar. Sorcerer Willow Ulfgood (Warwick Davis) and his companions, mercenary Madmartigan (Val Kilmer), the heroic Sorsha (Joanne Whalley) manage to protect the child and fulfil her destiny, ending the wicked queen’s reign over Tir Asleen.

But a vision comes to Willow, one which warns of an impending darkness that threatens Elora and the kingdom. In an effort to protect her, they hide her identity even from herself and ban magic.

In the present day, Princess Kit (Ruby Cruz) is sparring with her close friend Jade Claymore (Erin Kellyman). After Kit defeats aspiring-knight Jade, they are called home. A royal visit is coming and they need to prepare.

Prince Airk (Dempsey Bryk), Kit’s twin, is out in a field with maid Dove (Ellie Bamber). Their romance is cut short for the same reason, as knight Jorgen Kase (Simon Armstrong) urges them back to the castle.

They are met by their mother, Queen Sorsha, who berates them for their lateness and neglecting their responsibilities. As her children hurry to get ready, she hears Willow’s voice on the wind, telling her the Gales are coming.

Elsewhere, Commander Ballantine (Ralph Inneson) is asking Jade if she has told Kit yet. Jade replies that she can’t find a way to do so.

At the banquet, Sorsha is discussing some recent attacks outside the Barrier, the magical protective shield which protects the land, with the reason for their feast: the visiting King Hastur (Derek Horsham) and Prince Graydon Hastur (Tony Revolori), who Kit is arranged to marry to unite their families and kingdoms. Their ceremony is to be the following day.

Sorsha descends to the dungeons to seek counsel with a friend and confidant, the prisoner Boorman (Amar Chadha-Patel). She is conflicted about making Kit marry.

Jade decides to confess her secret to Kit — that she has been put forward to make waves as the first female in the Shining Legion, an elite unit of knights. It means she will have to leave Kit and the kingdom she knows behind.

In frustration and upset, Kit rages against Prince Graydon, regaling him and the wedding party with the tale of a princess who fought and won in a tournament for her hand, in order to determine her own destiny. She storms out of the hall.

Sorsha berates her for her actions and Prince Airk attempts to defend her, but also falls foul of his mother’s anger. Kit says Airk can do as he likes, as he can leave whenever he wants and holds no real responsibility, just like their father did.

Dove, who saw Airk talking to some courtesans at the feast, finds Airk and decides to end their courtship as he is not ready to commit and is too much of a distraction from her job. He says he is and is ready to with her. He gives her a bracelet to signify it.

Kit, meanwhile, has snuck to see Jade in her quarters. She wakes her up and tells her she has decided to run away beyond the Barrier, kissing her and confirming the pair’s true feelings for one another in the process.

Sorsha, in bed, wakes from terrifying nightmares of evil. We then see four dark figures standing on a distant hilltop, overlooking the castle. One blows some ominous smoke in the direction of the city which transforms into a dense blanket of fog.

Jade is outside, trying to convince Kit to stay, when she notices the odd weather. In that moment, one of the four — a swooping, flying shapeshifter — takes out a castle guard, and a giant figure, The Scourge, attacks some others. Death dogs storm into the city and our heroes grab arms to defend, including Boorman, who Sorsha frees to help in the fight.

Sorsha and Kit battle a creature wielding bladed whips, while Airk faces off against the flying creature. Commander Ballatine is against the evil sorcerer, who plants his staff on him and speaks something in Pnakotic.

The Scourge has Jade against a wall, but his arm is lopped off by Boorman. The evil begins to retreat, and only then do the heroes notice that Prince Airk is also gone. Visiting Prince Graydon saw the shapeshifting witch take him as he watched the battle from an upstairs window.

A rescue mission is mounted and Kit immediately volunteers to lead it. To her surprise, her mother agrees. Joining her is Jorgen, Jade, and Prince Graydon, who is volunteered by his father to accompany his bride-to-be on her quest. Sorsha picks Boorman to join them too, citing his knowledge of the lands beyond the barrier. He is happy to go, eager “to square a debt with an old friend”.

The party needs a sorcerer to help battle the evil, and Sorsha says she knows one, Willow, who will be willing to help and will no doubt be expecting them. She reveals that Willow disagreed with the ban on magic, insisting magic would be all that could save them when the evil did return.

Commander Ballatine gifts Jade a sword for their quest, and Sorsha tells her that Kit will need Jade to balance out her rashness with sensible thinking. As the party leaves the gates, we see Ballantine appearing to battle some kind of lingering infection from the evil sorcerer’s touch during the battle.

As the group get underway, Jade tells them someone is following. It is revealed to be Dove, who wanted to join them to save Airk. The group let her stay overnight, but say she has to return home in the morning as she is ill-equipped for their adventure.

The next day, Dove has already left camp, and we find her attempting to cross the gorge to reach the Barrier on a shaky fallen log.

The rest of our heroes have ridden to the Mother’s Gate, the main entrance in and out of the kingdom, but find it deserted. There is a message daubed on the wall referencing ‘The Hidden One’. As Prince Graydon reads it aloud, the ground shakes, and Dove barely survives as the log she is standing on tumbles into the gorge. As she scrambles back to steady ground, she manages to push through the Barrier.

The rest of the group spot her walking across a field past the border. As Jorgen gives them a stern warning about staying alert, an arrow pierces his chest. Skull Reavers are upon them, bandits on horseback. The party flees, led by Boorman, who leaps on horseback off a cliff and into a stream below. The group make their escape by following him as the Skull Reavers look on, shouting his name.

Later, Kit apologises to Graydon for her behavior in the hall. Graydon says he understands, and thinks you should be in love with someone to marry them, but also says when they are in charge they will be able to change such things.

At Willow’s village, the group ask after him to a man. The place seems otherwise abandoned. The man claims to be Willow, but the sorcerer’s ruse is revealed when he steps out from within one of the ruins. He knows why they have come to him and says that Airk has been taken by the Withered Crone, to a place beyond the Shattered Sea, off any charted map.

Willow then spots Dove at the back of the party and shocked, approaches her. As he whispers a spell, a birthmark reveals itself on Dove’s arm: she is Elora Danan, and the fate of the world is in her hands.

What did you think to the end of Willow episode one? Tell us in the comments below.

Comments Off on The Fantasy Returns: Recapping ‘Willow’ Episode 1