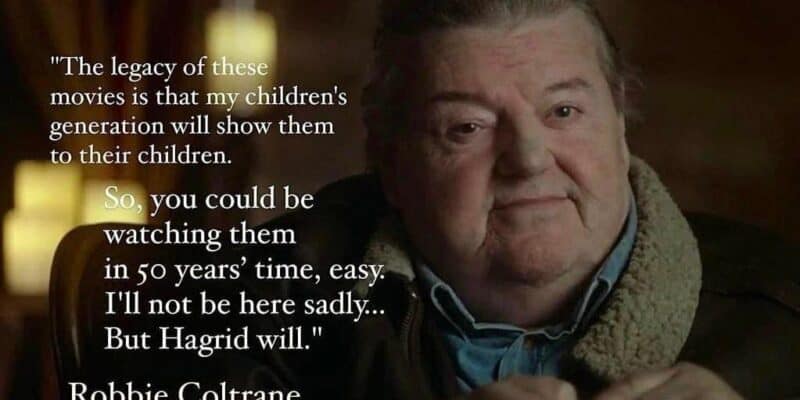 Harry Potter co-stars have taken to social media to pay tribute to their favorite gentle (half) giant, Robbie Coltrane.

Robbie Coltrane, who played Rubeus Hagrid throughout the Harry Potter films passed away at the age of 72.

Daniel Radcliffe, who played Harry Potter, had this to say about Robbie- “he was one of the funniest people I’ve met” and recalled how the actor “used to keep us laughing constantly as kids on the set.”

“I’ve especially fond memories of him keeping our spirits up on ‘Prisoner of Azkaban,’ when we were all hiding from the torrential rain for hours in Hagrid’s hut and he was telling stories and cracking jokes to keep morale up,” Radcliffe said, making reference to the third film. “I feel incredibly lucky that I got to meet and work with him and very sad that he’s passed. He was an incredible actor and a lovely man.”

Tom Felton, who played Draco Malfoy, took to Twitter with this sweet tribute.

One of my fondest memories of filming Harry Potter was a night shoot on the first film in the forbidden forest. I was 12. Robbie cared & looked after everyone around of him. Effortlessly. And made them laugh. Effortlessly. pic.twitter.com/eQA5v1YCm8

Heartbroken to hear that Robbie is gone. I’ll never forget the smell of cigars and beard glue- a wonderful combination.No one else on this planet could of played Hagrid, only Robbie. Just as Hagrid was in the books and films Robbie was in life- warm, compassionate and hilarious. A giant hearted man who was still looking out for us even decades later. Sending love to his family. See you on the other side Bobser.

J.K Rowling had nothing but a sweet message for Robbie and his family.

I'll never know anyone remotely like Robbie again. He was an incredible talent, a complete one off, and I was beyond fortunate to know him, work with him and laugh my head off with him. I send my love and deepest condolences to his family, above all his children. pic.twitter.com/tzpln8hD9z

Warwick Davis who played Professor Flitwick referred to Coltrane as the “Beloved Giant of Comedy.”

I was saddened to learn that fellow #HarryPotter cast member, Robbie Coltrane died today. Always jovial, he brought warmth, light and laughter to any set he walked on to. RIP Robbie, Beloved Giant of comedy.x pic.twitter.com/NGT644dA7K

Bonnie Wright, who played the only daughter and youngest Weasley, Ginny said that Hagrid was always her favorite character.

Heartbroken by the passing of Robbie Coltrane. Hagrid was my favourite character! Robbie portrayed Hagrid’s warmth, sense of home & unconditional love for his students and magical creatures so brilliantly. Thanks for all the laughter. Miss you Robbie. Sending love to your family pic.twitter.com/Gbl3NCsrlA

James Phelps, who portrayed one of our favorite Weasley twins (Fred), recalls meeting Robbie as a very nervous 14 year old boy on the first day of shooting.

I will miss the random chats about all subjects under the sun.And I'll never forget in September 2000, Robbie Coltrane came over to a very nervous 14yr old me on my 1st ever day on a movie set and said "Enjoy it, you'll be great". Thank you for that x

During the Harry Potter 20th Anniversary: Return to Hogwarts HBO documentary, Coltrane emotionally discussed how Harry Potter and Hagrid will live on past him.

He says, “The legacy of the movies is that my children’s generation will show them to their children. So you could be watching it in 50 years’ time, easy.”

He then added, “I’ll not be here, sadly… but Hagrid will.”