Recap: 'Willow' Episode 4 "The Whispers of Nockmaar" - Inside the Magic 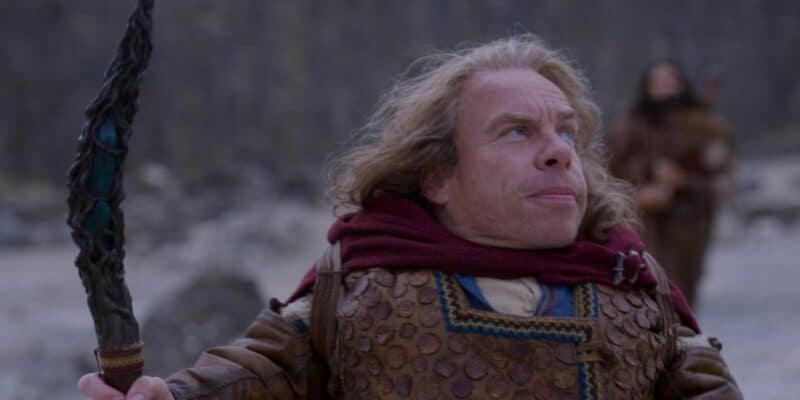 Last week’s episode of Willow (2022) saw our merry band of adventurers find themselves outside an old haven of evil: Nockmaar, one time residence of the villainous Queen Bavmorda. This week, our heroes venture inside…

In the halls of Nockmaar, Graydon (Tony Revolori) has been poisoned by The Lich, at risk of imminent possession in much the same way the late Captain Ballantine (Ralph Ineson) was. He says all this is the Gales trying to complete the Ritual of the 13th Night, to banish Elora Danan’s (Ellie Bamber) soul and seal the fate of the world.

As Willow Ufgood (Warwick Davis) tries to think of a way to save Graydon from his fate, the cursed prince says he has had experience with this sort of dark magic before.

Willow recounts how Bavmorda was corrupted by the Order of the Wyrm, led by the Crone, when she was younger and that led her to her evil path.

Elsewhere, Jade (Erin Kellyman) and Kit (Ruby Cruz) are discussing how Jade had to kill her father figure, Ballantine, last episode. “He gave me his sword, and I killed him with it,” Jade laments.

Boorman (Amar Chadha-Patel) is searching the castle for loot when he hears whispers from a sealed vault. After failing to get inside with his lockpick, he goes on the hunt for some lubricant and bumps into Kit in the storerooms, who is searching for an ingredient for a spell to help save Graydon. They have a brief chat in which he reveals more about his time spent with her father, Madmartigan (Val Kilmer in the original movie).

In the grand hall, Graydon himself is enduring hallucinations as he is ravaged by the purgation spell. He sees his father and brother as ghostly apparitions, alluding to something tragic in his past. His chest is marked by scars from a curse when he was younger.

Kit, having found the ingredient, stops to take in a rich tapestry depicting Bavmorda’s seduction by the Crone. A whisper from Bavmorda herself sees to echo through the halls before the tapestry itself goes up in flames, revealing a passageway hidden behind.

As Graydon endures the purgation, he — or The Lich through him — begins to channel others, including Willow’s daughter. Graydon alludes to Willow keeping something secret from him and the sorcerer dismisses Elora from the room when she questions it.

In the corridor, Elora meets Kit and the pair discuss their woes. Elora tells her about the woodcutters she encountered in the forest and who got killed in her defence.

Related: ‘Willow’ Episode 3 Recap: “The Battle of the Slaughtered Lamb”

Elsewhere in the castle, Jade encounters ghostly spirits of her dead family, and one murderous one of General Kael. She briefly fights him before running from her nightmare.

Boorman finds Kit and accuses her of taking the Lux Arcana, the key to activating the Kymerian Cuirass they are searching for which can help them defeat the Gales.

As Elora re-enters the hall, she finds Willow gone and a seemingly recovered Graydon. He says the poison entered Willow and now he’s gone, seemingly to the High Tower (a place Willow forbid the group to go to earlier).

Up in the tower, Graydon reveals he has been fully possessed and this was a trap all along. Just as he prepares to attack Elora, Willow appears, hurt but ready to defend her. The truth behind Bavmorda’s defeat is revealed: it wasn’t via a spell from Willow, but rather her own carelessness that got her killed.

Jade, Erin and Boorman arrive to help, and Jade and Boorman prepare to kill the possessed Graydon. Erin stops them and tells Elora that she did manage to grow the berry bush (a feat she was struggling to achieve via magic last episode) and that she can save Graydon with her powers too.

Elora decides to take the evil out of him, and as she does, sees a vision of a younger, possessed Graydon pushing his brother out of a tree and killing him.

As the party leave Nockmaar and continue on their journey, Boorman discovers he had the Lux all along and it was the dark magic attempting to twist the group against one another.

Erin asks Willow about the Blood of the Six, and confirms her fears that her bloodline is intrinsically linked to dark magic. As they head on, we see the Gales watching.

Cut to Airk (Dempsey Byrk), waking up in a ruined cell. As he ventures outside into an arid environment, he climbs a sculpture and sees a vast ruined city stretching into the distance.

What did you think to Willow episode 4? Let us know in the comments below.

Comments Off on Recap: ‘Willow’ Episode 4 “The Whispers of Nockmaar”