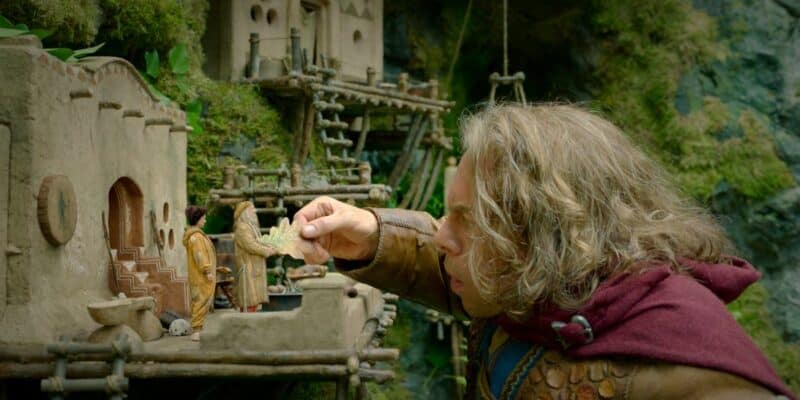 This week’s episode sees our Willow (2022) heroes venturing into a much-feared part of the world on their quest to rescue Airk (Dempsey Byrk) — the Wildwood. Legend has it that people who enter never want to leave. Will that be the case for our adventurers?

The episode opens with our group fleeing the Gales, who are hunting them through some ruins next to the forest. After ducking and weaving the monstrosities, Willow (Warwick Davis) suggests one solution: they could run into the Wildwood.

As our gang brave the trees, Jade (Erin Kellyman) tells Kit (Ruby Cruz) that the Bone Reavers that killed her family supposedly fled into the Wildwood.

As they make a small camp, Willow tells Elora Danan (Ellie Bamber) that she is still not ready to wield Cherlindrea’s Wand as she is yet to master Concentration and Divination, the last two of the four pillars of sorcery.

Elsewhere, Boorman (Amar Chadha-Patel) tells Graydon (Tony Revolori) his knowledge of women, after Graydon seeks some advice on how best to approach Elora following last week’s traumatic possession and whole attempting-to-steal-her-soul thing. As Boorman begins to deliver his advice, he spots some bones on the ground, and tells the group he has a plan — just as Bone Reavers spring from hiding to capture them all.

At the Bone Reavers camp, their leader, Scorpia (Adwoa Aboah), asks Boorman how he escaped the Dread Mines of Skellin. The mines are run by trolls and Scorpia is astonished to find Boorman alive. Kit introduces herself as royalty to Scorpia, who is unimpressed already, even before Jade intervenes to call the Reavers stupid and incapable of understanding what Kit could offer them in terms of rewards for setting them free.

Scorpia imprisons all of the group separately. In Willow and Graydon’s cell, they find a small residence for Brownies. In Elora and Kit’s, Elora is trying to get Kit to confront her feelings and Jade’s obvious feelings for her. She reveals she took the wand and will use it to free them.

In Scorpia’s tent, Boorman regales her with a mostly fictional portrayal of how he escaped the trolls. He makes out like it was a bold escape, when in reality we see him hiding in sewage. He tells her he didn’t get the relic — presumably the Kymerian Cuirass — and someone called Allagash didn’t escape either, which he seems pleased about. As Scorpia asks about Madmartigan’s fate (played by Val Kilmer in the 1988 original film), it cuts away.

We see Willow and Graydon talking to the Brownies now, revealed to be Rool (Kevin Pollack) and his daughter Ganush (Amalia Vitale). Rool offers to help with a diversion if they have the wand, but Willow realises Elora must have taken it.

In the camp, Elora and Kit have escaped but their attempted rescue of Jade has gone sideways. Jade uses the distraction to slip free of her bonds and grab Scorpia, who overpowers her and wins a short fight. During the tussle, she spots a marking on the back of Jade’s neck and asks for her to be taken to her tent.

Jade tells Scorpia she has always had that mark and Scorpia reveals it is a Reaver tradition to receive your family’s symbol on the back of your neck on your 100th day of birth, revealing a matching one on hers. It turns out they are sisters and their father was General Kael, the man who Jade thought killed her family. Their mother was killed by the rangers who took her, taking her to Sorsha’s castle (Joanne Qualley) and raising her as one of their own in an effort to prevent any further uprisings.

It turns out the Reavers helped evil Queen Bavmorda as part of a bargain she made with them to free them from their slavers.

When Willow and Graydon do arrive in camp, they discover a party. Jade’s new family ties have quelled any danger and the Reavers are now on side, celebrating her return to them. Elora has even made friends with Toth (Charlie Rawes), Scorpia’s lieutenant, over soup, and some of them have shaved Graydon’s beard off in an attempt to impress her.

Boorman and Scorpia reconnected over a dance, but romance isn’t in the air everywhere. Jade asks Kit if she knew about her Reaver heritage and Kit says she suspected, but didn’t want to tell her because it might break her heart. “You’re the expert in that,” Jade says.

Elora confesses to Graydon the reason she has been avoiding him is because she saw a vision of him killing his brother when he was younger. He tells her that it wasn’t really him then, or at Nockmaar when he was possessed, but that he’s still figuring out who he is. She says to find her when he does.

Kit and Elora find one another and open up, Kit asking for more advice on Jade, and Elora apologising for her behaviour earlier. The truth plums being served at the party have been working their magic on everyone. Willow even confesses to Graydon that his defeat of Bavmorda was mainly good luck, and that he’s terrified of the responsibility on his shoulders. Elora overhears and stalks away.

Jade and Kit are finally about to have a truthful romantic moment when Kit is suddenly grabbed by a troll and pulled into the trees overhead. The camp is under attack.

What did you think to this week’s visit to the Wildwood? Tell us in the comments below.