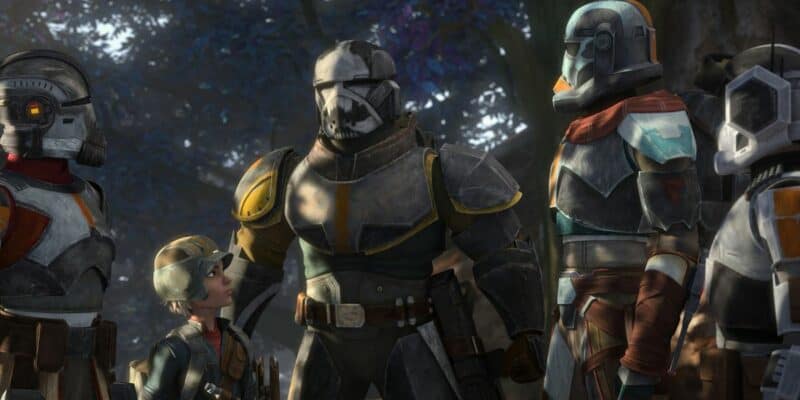 The Bad Batch Season 2 is finally here, and kids who watched the premiere might have seen more than they should in the first two episodes.

Dave Filoni is a huge believer in starting his animation series to be very kid-friendly in the beginning and to make them more mature later on. The Bad Batch Season 1 was no different as it handled a lot of light-hearted moments, but it did have a more mature moment happen here or there. Dee Bradley Baker did a one-man show as he voices all of the clones and naturally voices everyone in Clone Force 99 besides Omega.

Season 2 starts with a fun quest to recover a part of Count Dooku’s war chest. This mission doesn’t go as planned, but the Empire learns that The Bad Batch is still alive, and Admiral Rampart isn’t happy about this. He speaks to Captain Wilco, the clone responsible for the operation, and asks him to disobey orders and falsify the report. He admits he can’t and stands his ground when Rampart kills him and says he’ll do it himself.

Why does Rampart have to falsify the report? He wants to move up in the ranks quickly. With Governor Tarkin in control, he must cover his mistake or face the consequences. The admiral has already taken credit for killing Clone Force 99 on Kamino, so he can’t admit they’re alive without facing Tarkin’s anger.

Unlike the Republic, the Empire is full of people like Rampart, who are ruthless and will break the rules as often as it suits them to get the position they want. Power and ambition fuel these characters leading to surprise murders like fans saw in Episode 2, “Ruins of War.”

The reason why this isn’t family-friendly is that children won’t get all the nuance behind the politics, but they will end up seeing more people die in cold blood. Families might not be happy to see their kids watch a Star Wars series and see innocent people being shot and falling off a cliff, and it seems like Season 2 will have more of this happen.

Unfortunately, Dave Filoni may have broken his normal rule of aging the series with the audience and made it more appropriate for the audience who grew up with Star Wars: The Clone Wars. Having the rating set for TV-PG means that all kids will have access to the series even if they really shouldn’t. Fans will have to wait until the rest of the series is out to decide, but it might be best not to let your kids see the series if you are worried about them watching people die in cold blood.

Do you think The Bad Batch is still meant for children?