Recap: 'Star Wars: The Bad Batch' - "Spoils of War" - Inside the Magic 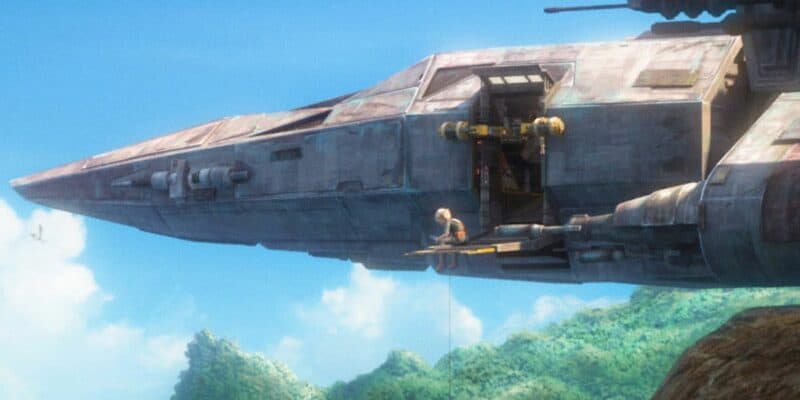 The Bad Batch are back! Clone Force 99 have made their return with an action-packed two-episode premiere for Star Wars: The Bad Batch (2021) season two, featuring a thrilling heist on Count Dooku’s old planet of Serenno. But how are our misfit heroes doing?

The episode opens with Hunter, Wrecker and Echo (all clones: Dee Bradley Baker) sprinting across a tropical beach with some loot, pursued by some giant crab-like creatures. At their ship, the Marauder, young ward Omega (Michelle Ang) is reading up on Imperial ships while fishing, overseen by Tech.

The crabs launch themselves out of the water and onto the ship just as they hear the call for pickup from the rest of the gang. After a fraught fight fending them off and evacuating the rest of the team, they head back to their Trandoshan employer Cid (Rhea Perlman). In her office, there’s a mysterious pirate, Phee (Wanda Sykes).

Phee has given Cid some intel about Count Dooku’s war chest, which sits on Serenno and is currently being sacked by the Empire. Cid wants them to retrieve it.

Hunter is reluctant to take the job due to the proximity to the Imperials, but the rest outvote him. Cid says there’s enough of a reward for them to buy true freedom and safety in a changing galaxy. Echo thinks they should use the credits they’ll earn to fortify and build an army capable of taking on the Empire properly, and — while Omega secretly listens in — acknowledges that their lives can’t be normal ever since rescuing her from Kamino in season one.

On Serenno, the Bad Batch discover the capital is ruined, destroyed in an Imperial orbital bombardment. Huge Imperial freighters are taking cargo loads of Dooku’s treasures off-world. While most of the group head to intercept, Hunter heads to booby-trap the escort ships parked nearby.

After Wrecker loudly takes out one of the Phase II Clone Troopers guarding the shipment, Hunter launches his diversion and detonates the parked ships.

During the alarm, the rest of the group apart from Wrecker become locked within one of the containers. They need to get to the main hull and an escape pod.

Meanwhile, Hunter and Wrecker escape from the encroaching forces and find themselves trapped in Dooku’s old throne room. The Imperials realise the thieves are on board the freighter and launch all their escape pods, but Omega uses her new knowledge of the Imperial Navy to find a solution: they can get planetside safely in one of the containers.

Hunter and Wrecker escape the throne room via a secret floor while the rest of the team force a release of all the cargo. The episode ends with the Bad Batch plummeting to Serenno’s forests, the emergency boosters not kicking in.

What did you think to The Bad Batch’s returning first episode? Tell us in the comments below.

About The Bad Batch:

From showrunner Dave Filoni comes a new animated Star Wars sensation. Created as clones of bounty hunter Jango Fett, Clone Force 99 — ‘The Bad Batch’ — are an elite force of Clone Troopers who turned their back on the Galactic Empire’s regime to carve their own path through the galaxy. Alongside young ward Omega (Michelle Ang), they embark on adventures during a time of great turmoil in the galaxy.