Disney Ride Malfunction Reveals a Mysterious Insult - Inside the Magic 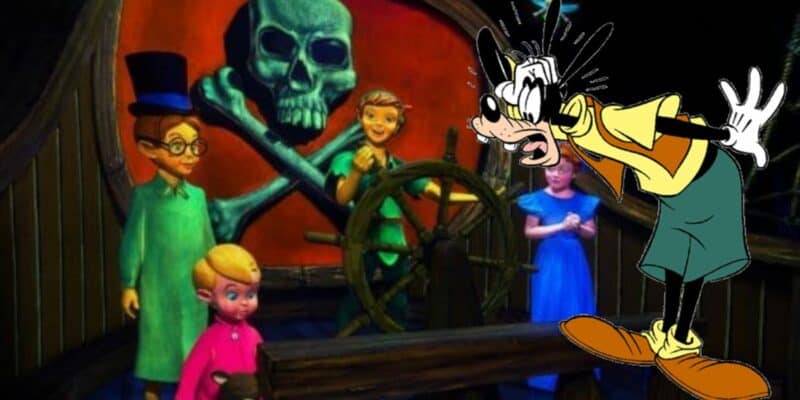 Many Disney Parks attractions seem to stop, stall, or otherwise malfunction as they continuously fall into disrepair. The only thing more disillusioning than having the lights go on and being escorted off a Disney Parks ride might be Mickey’s head falling off mid-performance at the Main Street Theater. However, recent footage reveals a curious mystery concerning Peter Pan’s Flight.

Peter Pan’s Flight is one of the oldest and most popular Disney attractions in both Disneyland and Walt Disney World. To say the attraction isn’t showing its age would be untrue as some of the effects, while charming, have become quite dated compared to the ride queue Guests enter before boarding their flying pirate ships.

The occasional malfunction on long-standing attractions are semi expected, but a TikTok video surfaced revealing the start of a very humorous mystery as guests dangled above Neverland. Strangely, the footage has Guests asking “Who is Bill, and why does he suck?”

@awkward_andy’s revelation that Neverland is little more than a small-scale model in a dusty, dark room is certainly a disenchanting experience, but some Disney fans are more curious about the piece of insulting graffiti hiding up in the corner of the ride. On a stack of wooden beams, riders hanging above the Neverland Lagoon can spy the phrase “Bill Sucks,” written in what appears to be sharpie. Already, the video has spawned the question, “Who is Bill?” and some Guests are even speculating his identity in the comments of the video. Bill might have been an Imagineer involved with the construction of the ride, a hated manager, and one similar video to the one above even suggests it might have been former president, Bill Clinton. Either way, it remains a mystery.

Related: The TRUTH of What Fans Think Should Be Banned at Disneyland

In retrospect, Disney should really invest more time and money into Park maintenance, as the sudden break of the illusion doesn’t do much in favor of the company’s attention to immersion. However, it does allow some Guests a brief look into how these beloved rides function, as well as the human side of the people who built them. No matter who Bill was, he might have been essential in bringing the ride to the Guests.

Do you know who “Bill” is? Tell us in the comments below!