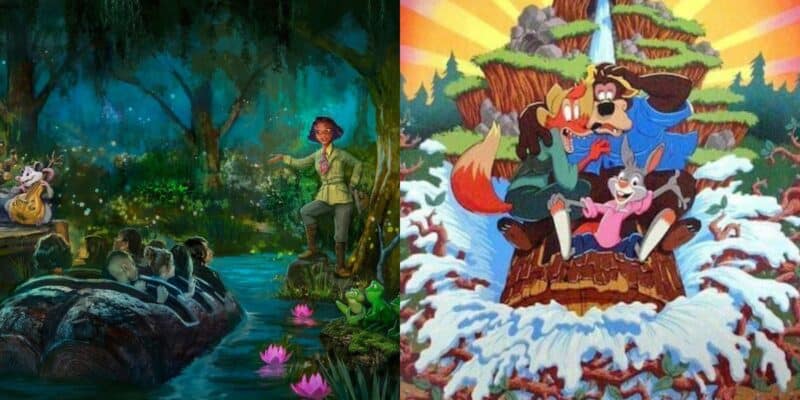 Splash Mountain had its final day of operation only yesterday, and while hundreds of fans were mourning the loss of a theme park icon, there are still just as many looking forward to what the future will bring as Tiana and her friends from down in New Orleans take over and invite Disney Park Guests on an adventure in the Bayou.

Tiana’s Bayou Adventure is set to be the re-theme for Disney’s iconic Splash Mountain. While the track and mechanisms that bring the actual attraction to life will remain mostly unchanged, Br’er Rabbit, Br’er Fox and the rest of the critters that called the ride home are moving along to make room for Tiana, Louis, and the rest of the cast of The Princess and the Frog. The new theme will certainly appeal to a larger, more modern audience as preparations are made to welcome the new characters into the ride, but some fans are already chomping at the bit to see new life breathed into an attraction that’s been with the Parks for over three decades. A recent Reddit post had hundreds of responses in barely a day, and fans are certainly making themselves heard.

Many fans are expressing both their excitement and concerns for the new development coming to the Disney Parks, and rightly they should. Disney has had some bad press in the past concerning the condition of their rides, so the company really needs to handle this properly. u/LadPrime cuts right to the chase with their thoughts on the matter.

“Splash Mountain was my favorite ride at Disney World. I truly, sincerely hope that the Tiana retheme is as good or better than Splash Mountain… It ultimately comes down to the company giving this project the time, effort, and budget it needs. I truly hope that this is not something they cheap out on and keep in mind why Splash Mountain was so beloved. I am frankly already a bit concerned by the tree with the boat in it from the initial concept art already being apparently budget cut-out of the plans and the new peak being pretty generic looking.”

“They can pull out all the stops and deliver something special, or they can just throw something together serviceable quickly and pat themselves on the back. Again, I truly hope it’s the former, because if it’s the latter that would be a tremendous disappointment to both P&TF fans and Splash Mountain fans.”

u/Tiger1964 adds another crucial point in the approaching re-theme, the importance of refurbishing and repairing the problems accumulated in the ride’s 34 years.

“I’m just hoping Disney puts the effort in and we get quality animatronics, better lighting, replace the boats with ones that don’t sink, etc. The current animatronics pre-date Splash, so c’mon Disney, spend the money and replace these ancient things.”

And u/cml throws in her “cautious optimism” about the attraction by sharing their thoughts on Disney’s current state, using Splash Mountain/Tiana’s Bayou Adventure as a reference point in her, honestly refreshing, point of view.

“I feel like Disney can sense the need for the new ride to be amazing, because it’s replacing such a beloved ride. I think we are far from the time when they destroyed Imagination, just with the internet and social media all of the publicity that come with it, and competition with Universal. The backlash for screwing up this ride would not be insignificant.”

These are only three of the 323 comments attached to the post, and the responses are still growing. Fans of Splash Mountain will always look back on the ride fondly through their nostalgia goggles, but Walt Disney was always about moving forward. The attraction had a magnificent run, and it drenched thousands of Guests in its time. However, where would Disney be if there wasn’t room to grow?

Are you ready to ride with Tiana, or are you still missing Splash Mountain? Tell us in the comments below!