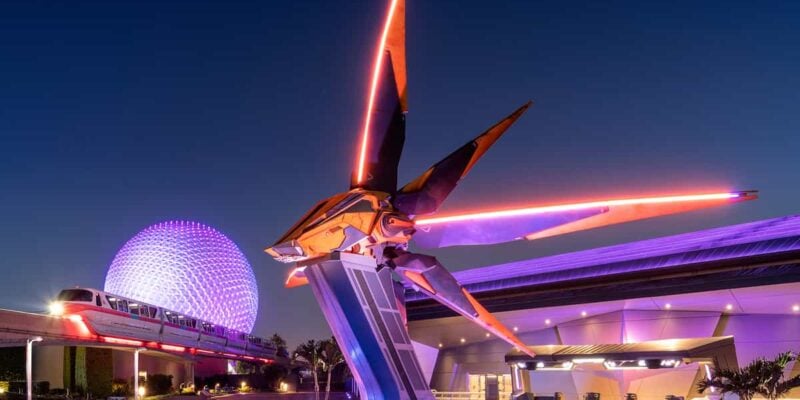 Walt Disney World is always welcoming new experiences for Guests to enjoy. Though with the new TRON roller coaster, sometimes these new additions take a lot longer than we expected.

Regardless, with recent expansions at the Walt Disney World Resort, like Star Wars: Galaxy’s Edge at Disney’s Hollywood Studios and even Pandora – The World of Avatar at Disney’s Animal Kingdom, Disney has knocked it out of the Park in terms of interactivity and technology.

However, the most exciting new addition to The Walt Disney World Resort has to be Guardians of the Galaxy: Cosmic Rewind. Located at EPCOT, it’s the Park’s first-ever roller coaster as well as Disney’s first foray into a new ride technology. The coaster features a lot of high-tech features and theming, including an impressive pre-show and queue.

The coaster also got a holiday-themed makeover back in November. Disney described this seasonal overlay as follows:

This season, the Guardians are trading in their classic hits playlist for a mash-up of seasonal jams at Guardians of the Galaxy: Cosmic Rewind. Blast off to the tune of an awesome holiday single, bringing joy to Xandar and Terra, too.

This holiday overlay was originally supposed to last until December 30 but was reportedly still operating on January 1. As of January 2, the ride is back to normal operations.

Guardians of the Galaxy: Cosmic Rewind features several songs that Guests have the chance of hearing during the ride. The songs Guests could hear during their journey are “September,” “One Way or Another,” “Disco Inferno,” “Everybody Wants to Rule the World,” “Conga,” and “I Ran.”

It is important to note that Cosmic Rewind utilizes a Virtual Queue system, similar to how Star Wars: Rise of the Resistance operated when it first opened. Per Disney:

Have you had the chance to experience this new attraction at Walt Disney World?