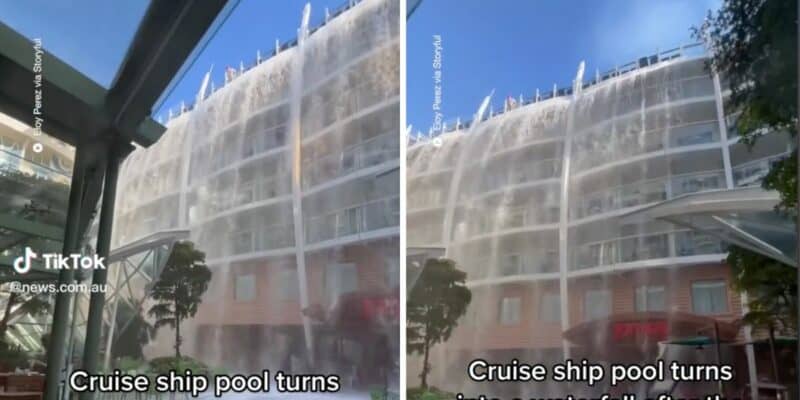 That’s a lot of water.

When embarking on a cruise, Guests have a lot of choices. Guests have the tough choice of actually choosing which cruise line they want to go with, whether it be with Carnival, Disney, MSC Cruises, Holland America Cruise Line, or Norwegian Cruise Line.

However, there’s one Royal Caribbean ship we recommend waiting to go on unless you bring your swimming suit, that is.

Recently, a massive cruise ship turned into a waterfall after making a hard turn. The water in the pool on top of the ship started to flood out and over the side of the boat. One lucky (or unlucky) Guest was able to capture video footage of the jaw-dropping scene and share it on the super-popular social media platform TikTok.

Check out the insane video below:

The specific ship was the Harmony of the Seas, a beautiful cruise ship part of Royal Caribbean’s fleet of ships.

A few weeks ago, Disney Cruise Line was making headlines after one of its ships had to stop its voyage during an emergency rescue mission.

Disney owns and operates quite a few ships, including the Disney Dream, Disney Magic, Disney Fantasy, Disney Wonder, and Disney Wish, with two more on the way.

People noticed a man stranded and floating off in the ocean near the boat. The cruise ship halted its voyage in order to help aid the Coast Guard as they rescued the 29-year-old Cuban man.

Last year, the Disney Fantasy ship also halted its voyage to aid the Coast Guard during a similar yet more tragic situation. The incident occurred off the coast of the Little Torch Key in the Florida Keys, and it was reported that multiple people died.

Carnival Cruise Line also aided in a rescue mission last year while one of its ships was on its way back to its home in Port Canaveral. The crew aboard Carnival’s Mardi Gras ship spotted a small vessel on the open sea near Cuba around 8:00 a.m.

Crews aboard the Carnival Cruise Ship were able to rescue a total of 16 stranded people.

What do you think about this story? Would you have been scared?