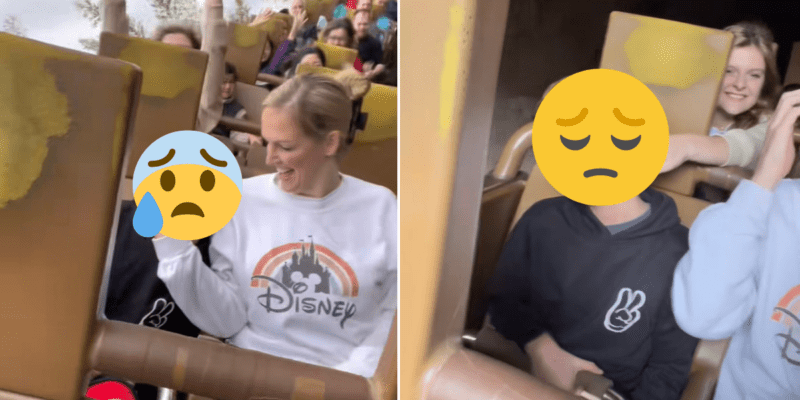 Parents have stirred polemic after denying “forcing trauma” on their children despite multiple faints aboard a Disney ride.

Family trips to Disney World should be some of the most magical experiences for all members, creating memories to last a lifetime and enjoying a day at the Most Magical Place on Earth together. However, some Guests may have different plans, as a family has taken an interest in riding the most thrilling attractions with their young children, with most rides ending in tears and multiple faints.

Britney Rene (@britneyrene) and her family have recently gone viral after sharing their experience riding some of the most extreme attractions at Walt Disney World Resort, facing their fears and powering through tears and multiple faints. The video that started this thrill-seeking series shows the two youngest children in the family as they are in line to ride Expedition Everest in Asia at Disney’s Animal Kingdom Park. The two children don’t seem too convinced to ride the extreme coaster, and actually state they are terrified of doing it but at the same time want to go on the iconic Disney ride.

The video then cuts to the family riding the attraction, with the parents laughing and everyone screaming, while the son faints twice during the ride and the daughter ends the ride in tears. However, in the “after” interview, both children can be seen as happy as one could be after facing the Yeti at the thrilling attraction, eating a Mickey-shaped pretzel as a reward, and commenting that it was worth it. You can see the viral video below:

Traumatizing my kids, one Disney day at a time. #disneyworld #animalkingdom #expeditioneverest

Traumatizing my kids, one Disney day at a time. 🤣 #disneyworld #animalkingdom #expeditioneverest

The TikTok video has racked up over 1M views, 155K likes, and 2K comments since it was originally posted. While many viewers have shared the family’s love for Disney and thrill rides, asking them to try other nerve-racking attractions, others have questioned the parents for “traumatizing their children” forcing them to go on a ride that is “terrifying” and “dangerous.”

The family has since recorded multiple videos addressing the alleged “trauma,” with the children being sarcastic towards the negative comments, explaining that they have decided to go on every ride, and commenting that, despite being scared, they’ve had fun after each ride.

The family has since gone on The Twilight Zone Tower of Terror and Rock ‘n’ Roller Coaster Starring Aerosmith — which is embroiled in a heated polemic prior to its indefinite closure — at Disney’s Hollywood Studios. The parents have made it clear that they are not “forcing trauma” upon their children, adding that “they truly felt like rockstars” after riding Rock ‘n’ Roller Coaster and that “now they want to ride ALL the big rides!”

The children’s initial fear is undeniably relatable, as most of us surely were terrified before our first rides on these thrilling attractions, but seeing the young Guests face their fears and enjoy their day at Walt Disney World with their family sure makes a couple of screams — and faints — worth it.

What do you think about this video? Were you scared before your first ride on Expedition Everest? Let us know in the comments below!