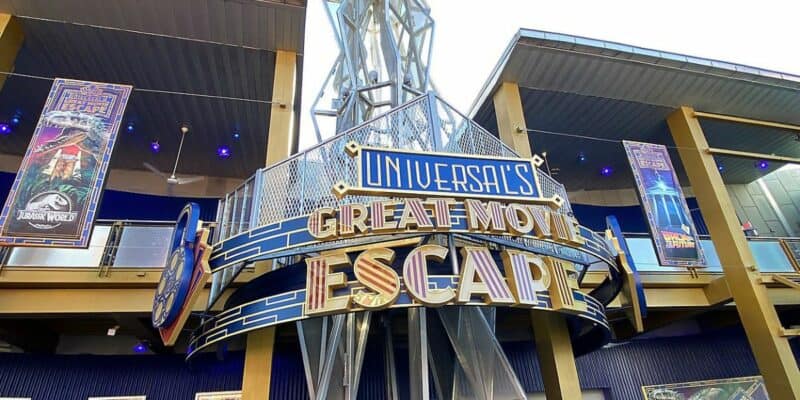 Today, Universal Orlando opened a new immersive experience to Guests, inviting them to be a part of classic Universal storytelling.

Related: Universal Orlando Resort Could Be Adding an Escape Room

These experiences are similar to traditional escape rooms, in that Guests have about an hour to solve various puzzles in different rooms, working together to find the solutions to these challenges and “escape” the room before time runs out. Some rooms even have varying special effects and lighting, including low lighting, fog, loud noises, and small rooms.

Like some escape rooms, Guests will watch a pre-show that outlines the story and setting for the escape room. Participants will also be introduced to their virtual guides for this experience. For Jurassic World: Escape, the guide is Riley, and for Back to the Future: OUTATIME, the guide is Nico. These guides show up throughout the experience, either on screen or audibly, guiding participants throughout the experience and offering tips or providing instructions.

Here are the storylines that Guests can anticipate for each room, per Spectrum News 13:

In Jurassic World, located on the upper level of the attraction, the stakes are high. Visitors become the newest geneticists at a secret lab on Isla Nublar. As they get familiar with the facilities, something goes horribly wrong: one of the genetically-engineered dinosaurs has escaped, and it’s up to them to not only help save other people on the island but also save years of precious research that could be lost.

In Back to the Future, located on the main level, visitors arrive at a museum in 1993 to help Doc Brown (Christopher Lloyd reprising his role) track down Biff, who has stolen Doc’s new time travel device. As they make their way through different time periods (The Old West, 1955), it will be up to them to save the space-time continuum before it’s too late.

Nate Stevenson, who is the show director for this experience, described how the creative team and escape room experts, along with the franchise’s filmmakers, worked together to develop authentic experiences for Guests:

“We love how we were able to weave the story and the challenges into each other. It’s not just, wow, this looks like InGen lab and here’s a random challenge to do. It’s so immersive, you feel like you’re actually in the movie and actually participating. And you are, you’re pushing the story forward.”

However, though these experiences might sound somewhat more advanced, they were actually designed for both adults and children, regardless of skill level. Per Stevenson:

“What we wanted to do was make something that appealed to somebody who had never done escape rooms before or didn’t really care for escape rooms that much but really wanted to be immersed in these cool brands. But for escape room aficionados, people who’ve done hundreds of these…we also wanted it to be challenging and fun for them as well.”

However, Universal’s Great Movie Escape is different from most escape rooms, as the puzzles in the room can be modified via a computer that can tell what is going on in these rooms. For example, if a group completes a certain challenge quickly, it could unlock some other aspects of the room that others who might not be as quick or skilled in escape rooms may not reach.

Additionally, these escape rooms are different than traditional ones, as these rooms can be played more than once. The experiences are random, and the solutions are always different.

Besides the level of detail in the games, Guests can also appreciate the general atmosphere and feel of the experience, even before they step foot into the games. Spectrum News 13 stated:

Before visitors enter either of the escape rooms, they’ll first encounter a classic Hollywood-inspired lobby, with art-deco designs and film reel canisters and other movie props. The space includes a screen that shows trivia questions, multiple seating areas and two bars — one on the main level and one upstairs.

At the bars, visitors will find a menu that features several themed drinks, including The Raptor Bite, The Hoverboard Highball and Silent Era. The bar also serves mocktail versions of the drinks. Tip: You don’t have to have a reservation for the escape rooms to enjoy a drink at the bar.

In the lobby, Guests can find costumes, props, and other memorabilia from the films. They can also buy themed merchandise from the escape room experience, including mugs, T-shirts, and even pins.

This is a separately-ticketed event, and you can buy your tickets on Universal Orlando’s website. Tickets start at $49.99 per person for one of these escape rooms, but prices can change depending on the date. These rooms allow six people maximum per group but can include multiple parties. However, private group options are available. These tickets start at $300 and can hold up to eight people.

Do you enjoy escape rooms? Would you want to participate in one of these themed experiences? Tell us in the comments!