"Problematic" Disney Character Could Appear In New Ride - Inside the Magic 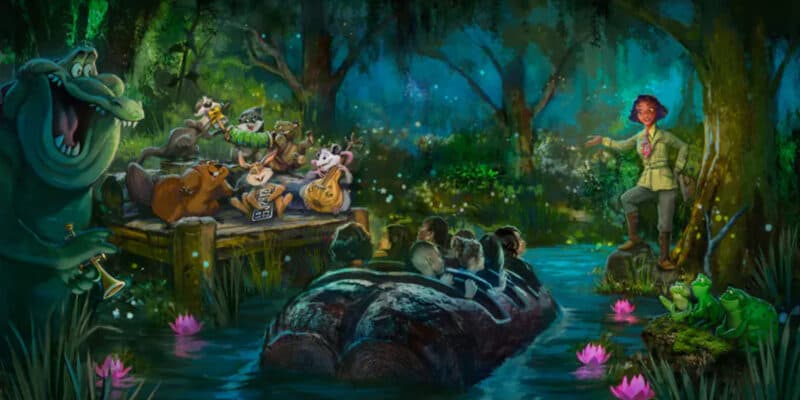 Disney’s iconic Splash Mountain is being revamped and re-themed as Tiana’s Bayou Adventure featuring the cast of The Princess and the Frog, but a recent reveal has teased a new cast of critters set to get their own scene in the ride. It could mean that the company isn’t out of the briar patch yet.

The original Splash Mountain debuted in 1989 and featured a whole cast of animatronic animal friends that appeared in Disney’s Song of the South.  While the infamous film was controversial, to say the least, its animated cast found themselves in a more positive light at the Magic Kingdom, becoming a Frontierland fixture for decades.

Br’er Rabbit, Br’er Fox, and Br’er Bear we’re practically the faces of the attraction since it first opened. However, times, cultures, and audiences can change, and it was decided that the ride was due for a massive overhaul. Although there are certainly vocal fans that support the shift from Song of the South to The Princess and the Frog, Disney might not be throwing Br’er Rabbit out with the bath water.

Disney recently announced that the ride would be getting a new saying with a new cast of animal characters including “some friends both new and familiar” described in the statement. Since there was mention of a rabbit in the list of critters, there might be a chance that Tiana, Louis, and their crew from down in New Orleans might be accompanied by some friends from the former attraction. The concept art with the band of animals is exceptionally and especially telling.

Anyone remotely interested in Disney Imagineering will know that the company hardly ever throw anything away. Bits, bobs, and other pieces of machinery are often repurposed and reused in other attractions. This is exceptionally true for Disney’s famous audio-animatronics, especially those that were once featured in America Sings that were repurposed for Splash Mountain. In an act of what goes around comes around, the same critters might be reused for the upcoming redesign. It would certainly make the transition easier for dedicated fans if Br’er Rabbit and his friends could still have a home in Tiana’s Bayou.

While his movie might still be considered problematic by some audiences, Br’er Rabbit and the rest of his gang have been a symbol of the Disney Parks arguably longer than Song of the South’s unsavory reputation. Doing away with him entirely is like throwing away a piece of vintage Disney history. Hopefully, he and the rest of his friends from the Briar Patch will find a new life with this new attraction.

Do you want Br’er Rabbit Back at the mountain? Tell us in the comments below!