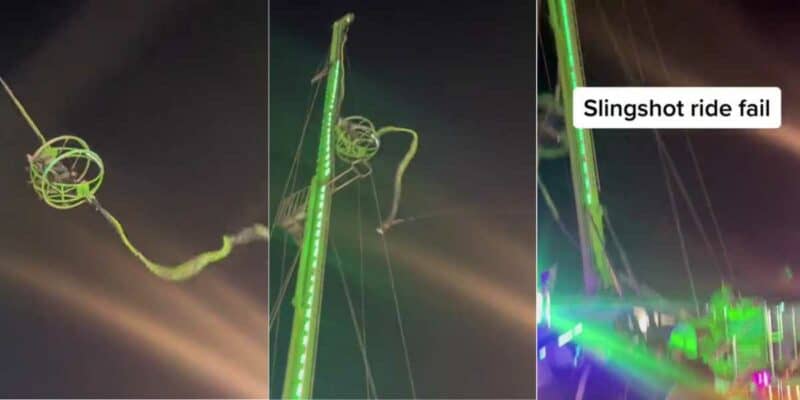 Another shocking accident has rocked the theme park industry after an attraction snapped, catapulting Guests into the air and colliding with a part of the ride structure.

Theme parks during the holidays are often packed with revelers taking in the festive atmosphere. From big destinations like Walt Disney World Resort in Orlando to smaller locations spread across the world, amusement parks are places of fun, joy, and occasionally a dusting of seasonal magic.

However, Guests attending Winter Wonderland in Hyde Park, London, in the United Kingdom, were in for a shock when one attraction left two visitors crashing into a metal pole and hanging until help arrived. A video shared on Twitter by @jamesdrvr captured the horrific moment it all went wrong:

The video shows, what is reported to be two teenage boys, being set up for the ride. Shortly after taking off, one of the cords that control the attraction’s slingshot action snapped sending the ride vehicle careening into the metal support beams on the opposite side.

Winter Wonderland is a popular annual event located in Central London’s historic Hyde Park. The event is spread across multiple dates at the end of each year and often becomes extremely busy as Guests peruse the theme park and ride attractions like the slingshot.

Onlookers can be heard gasping in terror at the botch, with another clip showing Winter Wonderland staff blocking access to the ride afterwards.

The Metropolitan Police said it received a report that ‘two teenage boys had been in a fairground ride when one of the bungee cords attached to the cage had snapped’ and ‘the cage was left suspended in the air’.

It added that the two riders had left by the time officers and firefighters reached the park having been freed by staff.

According to reports, and rather remarkably, no injuries were reported.

Unfortunately, theme park accidents are not uncommon and unlike the situation which happened at London’s Winter Wonderland, can end in injury or even worse. This year saw the tragic death of Tyre Sampson after he fell from the Orlando FreeFall at Orlando’s ICON Park. As a result of the incident, the ride’s operators, the SlingShot Group, will tear down the attraction.

Have you ever been in a theme park incident? Let us know in the comments down below.