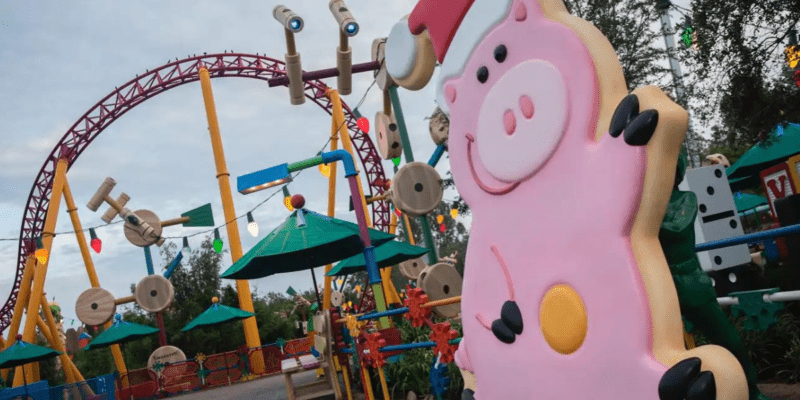 Walt Disney World Resort is known as “The Most Magical Place On Earth,” and it only gets more magical during the Holiday season.

Disney World Guests are currently enjoying the beautiful decorations at the Disney Parks — which include Magic Kingdom, EPCOT, Disney’s Hollywood Studios, and Disney’s Animal Kingdom–as well as many more Christmas offerings, like the return of Mickey’s Very Merry Christmas Party.

However, one Holiday offering that many Disney Park fans has been missing for two years. We’re talking about the Toy Story Land Christmas decorations.

Prior to the pandemic, Disney had placed decorations throughout the land, including a scarf on Woody as you enter Toy Story Land, a Hamm sugar cookie, giant alien ornaments, and popcorn strings. Those completely vanished for the last two years, but we are happy to report that they’ve finally started their return!

While Woody doesn’t have his scarf yet, Guests have already spotted the giant alien ornaments and the Hamm sugar cookie.

User @savannahinadventureland shared a video on TikTok where we can see the giant Hamm sugar cookie back.

Many fans have been upset by the lack of Holiday decorations in the land the past two years. Disney shared a statement in 2021, saying that the pandemic had affected the amount of decorations it could place.

It’s certainly awesome to see these decorations and much more returning.

If you’re heading to Walt Disney World Resort for the Holiday season and you’re wanting to attend Mickey’s Very Merry Christmas Party, you’ll need to purchase a ticket ASAP if you don’t have one already. Currently, there are only two dates remaining— December 13 and December 15– and ticket prices are $179.00 for either night.

What do you think of the Holiday decorations returning at Toy Story Land? Let us know in the comments!