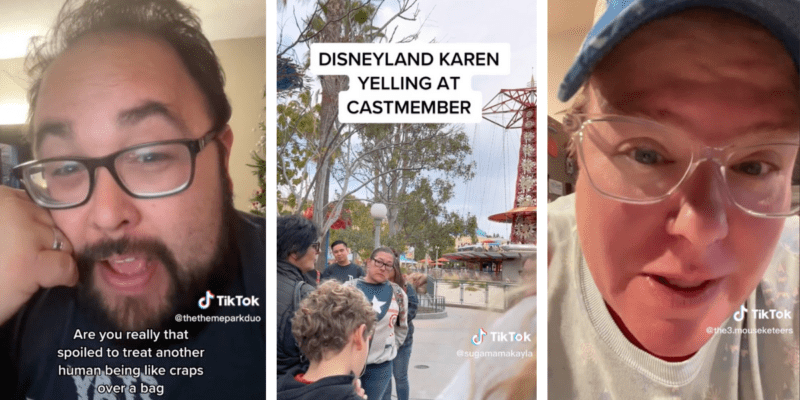 Earlier this week, we reported a viral TikTok of a Disneyland Resort Magic Key holder yelling at a Disney Cast Member at Disney California Adventure. In the video, shared by @sugamamakayla, a group of Guests is furious after the Disney Park ran out of free Magic Key holder tote bags 30 minutes before the pickup time ended:

As the TikTok received more traction, it got the attention of other Magic Key holders and Disney influencers. Many felt the woman in the video gave Annual Passholders a bad name and created their own videos to combat the negativity.

First is Gabe of @themeparkduo:

#stitch with @thedisneypeenut so tired of seeing grown adults act like children. And this time it’s over a stupid bag. GROW UP! #disneyland #karens #disney #fyp #fypシ

“This is all over a bag. A freaking bag,” Gabe said. “Are you really that spoiled to treat another human being like crap over a bag?”

“Hold up, you don’t even have to answer because your actions speak for itself,” Gabe concluded. “I’m so tired of seeing this happen. Grown adults acting like children.”

“Here we go, the week of Christmas and Hanukkah, and we’re going to harass Cast Members because they ran out of a tote bag,” Sara said. “…It always says ‘subject to availability’ when Disney gives out free stuff, when anyone gives out free stuff. What makes you so entitled that you feel you are above that? That you feel you’re owed something else?”

Many Disney Parks fans agreed. “All for a bag. I’m a key holder and if I was there and they said they’re out I’d be ok thank you maybe next time. It’s ridiculous the entitlement,” @my_lil_grogu wrote.

“So so sad,” said @magicwithgabs. “How do people think this is ok?”

What do you think about this “Disney Karen” interaction? Have you ever seen a “Karen” at Disneyland or Walt Disney World Resort?