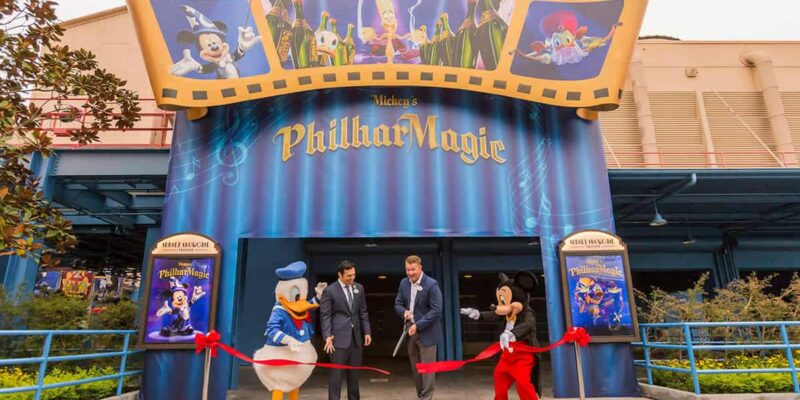 We just learned that Mickey’s PhilharMagic will be closing in late January of next year. The official last operating day is January 23, with a refurbishment taking place starting on January 24. As of now, there are no details on when this attraction will reopen.

Donald ends up going through some of the most beloved Disney animated films as he finds himself stuck right in the middle of some Disney classic song scenes. These include “Be Our Guest” from Beauty and the Beast, “A Whole New World” from Aladdin, “I Just Can’t Wait To Be King” from The Lion King, “Part of Your World” from The Little Mermaid, and more. More on the attraction:

A Cinematic Concert for the Eyes and Ears

Head over to the Sunset Showcase Theater in Hollywood Land to catch this spectacular 3D fantasy adventure featuring many beloved Disney characters!

As the lights dim, we find Donald Duck fast asleep. Mickey Mouse appears with music in hand and wakes Donald before rushing offstage to ready the show. As Donald warms up the orchestra, he spots the conductor’s baton and Mickey’s Sorcerer’s Hat. Deciding to try his hand at conducting the concert, he’s suddenly plunged into a 3D dream world of classic Disney animated musical sequences.

Iconic Songs in Unforgettable Settings
Experience “Be Our Guest” from Beauty and the Beast, “Part of Your World” from The Little Mermaid, “I Just Can’t Wait To Be King” from The Lion King and “You Can Fly” from Peter Pan—plus many more—presented for the first time in stunning 3D.

What’s your favorite “show” at Disneyland? Have you experienced this attraction at Walt Disney World?