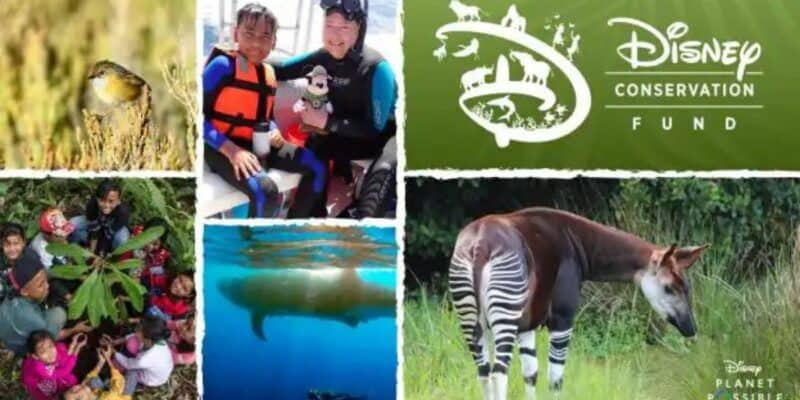 Disney is a large company, and large companies are held to a higher standard regarding corporate social responsibility (CSR) efforts. One way Disney has grown its CSR involvement is through conservation endeavors, specifically protecting biodiversity and wildlife species.

Since 1995, Disney has committed more than $120 million to causes that will bring about change to maintain a healthier planet for both people and wildlife. Disney Conservation Fund has been a large part of this change, giving grants to 43 nonprofit organizations that partner with communities in 25 different countries to protect more than 60 species alone in 2022.

These collective efforts are known as Disney Planet Possible, and Disney wants to honor communities and teams worldwide who are dedicated to these conservation activities, spending their valuable time, effort, and creativity to contribute to a better, happier, and healthier planet for everyone. Here are some examples of what’s going on worldwide in these conservation efforts, per Disney Parks Blog.

First, there is the Okapi Conservation Project in the Democratic Republic of Congo, where a dedicated team works on protecting the Okapi Wildlife Reserve’s rainforest, as well as its wildlife. However, this has been growing increasingly difficult, per Disney Parks Blog:

Poor infrastructure has increased travel and field supply delivery costs, growing insecurity in the region requires a team member to fly to their nearest bank to withdraw program funds and avoid a 12-hour journey on unsafe roads, and the team has had to develop strict communication and evacuation plans in the event a breach in security occurs.

Nevertheless, this team keeps adapting and moving forward with their collaborative community programs to protect the wildlife and the forest and improve the lives around them, emphasizing respect for the health, culture, and traditions of the indigenous Mbuti people.

Next, the Institute for the Conservation of Wild Animals (ICAS), located in the Cerrado biome in Brazil, protects anteaters from dangers, including collisions with cars as well as loss of habitat. The latter has become a severe problem in 2022, as habitat loss has reached peak levels. However, the team in this biome is finding better habitat locations for these anteaters, rescuing and rehabilitating animals that are injured or orphaned, and also developing solutions for new state-wide roadway safety requirements that will benefit wildlife, protecting these animals as well as people on the road.

The Borneo Nature Foundation in Indonesia is helping the orangutan populations and the peat-swamp forests where they live. Every year, there are fires in this area that are damaging to public health by releasing CO2 as well as having a negative impact on forests and surrounding wildlife.

Over the past two years, this foundation has planted 96,302 seedlings in this burned peatland, all while supporting the tree nursery program. The grant from the Disney Conservation Fund will greatly help this cause by restoring peatlands damaged by fire, supporting local youth and community education, and increasing capacity for local firefighting efforts, as well as fire prevention.

In Australia, the Nature Foundation (NF) Limited is responsible for overseeing seven nature reserves for conservation, spanning more than 500,000 hectares. This helps support the Mount Lofty Ranges Southern Emu-wren, which is critically endangered, as well as the Traditional Owners of the Ngarrindjeri community. These conservation efforts help to not only improve but also increase available land for the birds, as well as protect the community’s values, culture, traditions, and heritage in these conservation initiatives through a cultural heritage assessment.

Shark Team One in Mexico partners with Yucatan Peninsula communities to protect the endangered whale shark population. This is done by lessening negative impacts from humans, developing marine wildlife corridors that are protected, as well as establishing ecotourism and artisanal fishing communities that are sustainable.

Additionally, the team found a pregnant whale shark, meaning that their efforts to protect this species have been going successfully, which motivates the team to continue to focus on learning more about and protecting this habitat.

In the United States, the Greater Farallones Association conducts the Long-Term Monitoring Program and Experiential Training for Students (LiMPETS) program, which encourages students to get outdoors in order to observe and gather data on 27 marine life species. This is done at more than 60 rocky intertidal and sandy beaches found on California national marine sanctuary coastlines, which includes near-critical kelp restoration locations around the Greater Farallones Marine Sanctuary.

This program consists of more than 5,000 students every year, and through this program, students are inspired to take an interest in and learn more about STEM and being stewards of the oceans.

What do you think about Disney’s conservation efforts? Are there any other conservation endeavors you’d like to see Disney participate in? Tell us in the comments!