Legendary Sports-Themed Day Returns to California Adventure - Inside the Magic 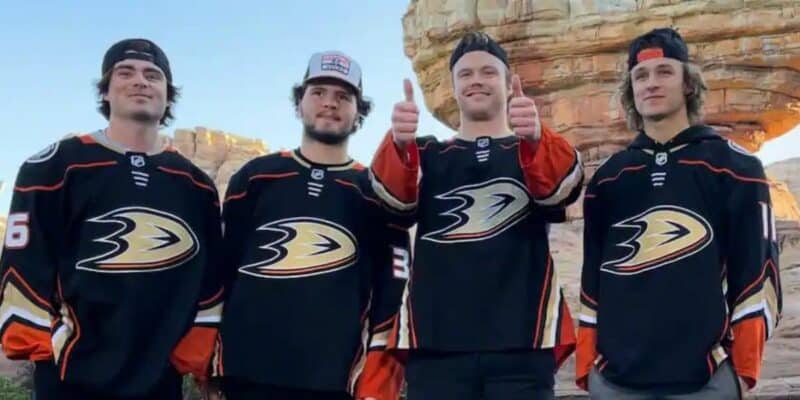 This event is even more expansive this year, as certain experiences can be found at Downtown Disney. But let’s take a look at all that Guests can discover on January 12!

Below is the schedule of events taking place at Disney California Adventure Park during Anaheim Ducks Day, per Disney Parks Blog:

At 1:30 p.m., view some of your favorite players from the Anaheim Ducks in a cavalcade, traveling along the performance corridor from Paradise Gardens to Hollywood Land.

From Park opening to 6 p.m., you can enter the Fan Zone at the Hyperion Courtyard to participate in themed activities, photo ops, and more.

And from Park opening to 6 p.m., check out some Anaheim Ducks Day merchandise featured outside the Super Store featuring Avengers Campus. This includes merch like tees, spirit jerseys, baseball caps, beanies, pucks, pins, and more! Disney Parks Blog notes, however, that these are in limited supply, discounts cannot be used, and there will be purchase limits.

And, as always, check out the treats that will be available at this event! For example, you can find a hockey puck brownie at Studio Catering Co. and Schmoozies, an orange creme puck at Trolley Treats and Marceline’s Confectionery, and even orange-flavored cotton candy at the Hollywood Land outdoor vending cart.

The fun doesn’t stop at California Adventure, though! At Downtown Disney on January 12 and 13 from noon to 6 p.m., fans can experience photo ops, enjoy appearances from a certain mascot, and enjoy special moments, all hosted by one of the Anaheim Ducks DJs. These experiences can be found near Downtown Disney LIVE! Stage and between Splitsville Luxury Lanes and Tortilla Jo’s.

For those wondering how Disney and the Anaheim Ducks are related, Disney Parks Blog provides a fun fact about this connection:

Fun Fact: Did You Know? The National Hockey League club was founded in 1993 by The Walt Disney Company and was originally known as the Mighty Ducks of Anaheim, a name which was inspired by the 1992 film, “The Mighty Ducks.” The name remained the same until the 2006-2007 season, when the club officially became known as the Anaheim Ducks.

For more on this event and for specifics on certain experiences, such as meet and greets, check out the Disney Parks Blog for more info.

Are you an Anaheim Ducks fan? Will you be joining these exciting events in January? Tell us in the comments!

Comments Off on Legendary Sports-Themed Day Returns to California Adventure