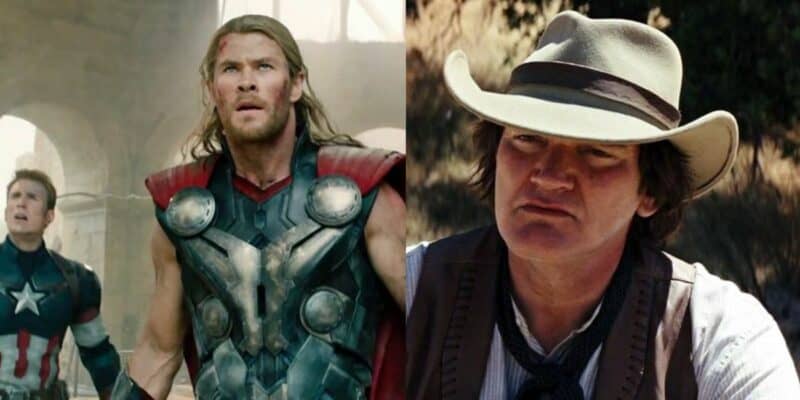 Tarantino has a bone to pick with the superhero franchise as a whole. Chris Hemsworth and Chris Evans just can’t hold a candle to Brad Pitt and Leonardo DiCaprio, apparently.

In 2022, the world has long since become accustomed to the Marvel Cinematic Universe and its movies dominating the industry — with the epic Phase Three conclusion to the “Infinity Saga”, with Joe and Anthony Russo-directed Avengers: Infinity War (2018) and Avengers: Endgame (2019) respectively creating an almost year-long movie-going phenomenon the world over. Movies like this redefined the industry, with Avengers: Endgame even overtaking James Cameron’s Avatar (2009) as the highest-grossing film of all time (something James Cameron was definitely not too happy about). Now, Tarantino joins the list of Hollywood elite directors bashing the Marvel movie mania, alongside Cameron and quite famously, Martin Scorsese.

Deadline covers an an interview with the 2 Bears, 1 Cave podcast, where filmmaker Tarantino spoke out about what he calls the “Marvel-ization” of Hollywood:

Part of the Marvel-ization of Hollywood is…you have all these actors who have become famous playing these characters.

Tarantino continues, stating that this phenomenon has removed the idea of Hollywood “stars”, stating that he believes the likes of Chris Evans and Chris Hemsworth are considered inferior to the superhero “franchise characters” that they play:

But they’re not movie stars. Right? Captain America is the star. Or Thor is the star. I mean, I’m not the first person to say that. I think that’s been said a zillion times… but it’s like, you know, it’s these franchise characters that become a star.

Tarantino however, wants to iterate that he used to be “crazy” about Marvel Comics when he “was a kid” — but not so much now that he’s “almost 60” — a statement not far removed from ex-DC writer Alan Moore who sees liking comic book-based movies as “infantile”:

The following might include language not be suitable for younger readers.

I mean, look, I used to collect Marvel comics like crazy when I was a kid. There’s an aspect that if these movies were coming out when I was in my twenties, I would totally be fucking happy and totally love them. I mean, they wouldn’t be the only movies being made. They would be those movies amongst other movies. But, you know, I’m almost 60, so yeah. No, I’m not quite as excited about them.

The insinuation here is that “older” movie-goers ought to have more “mature” tastes — and that movies based on properties aimed at younger audiences (a realm in which Disney deals almost exclusively in), indicates a sort of brash childishness that is poisoning the film industry. According to Tarantino, this “Marvel-ization” is killing the idea of glamorous, more “adult” fascination with Hollywood mega “movie stars”.

Because liking Spider-Man as a “character” is to him, inherently less valuable than idolizing a “movie star”. The real question here is: does the cult of personality lead to better movies being made?

What do you think of Tarantino’s opinion? Do you agree that Marvel is killing “movie stars” in Hollywood? Share your thoughts in the comments below!