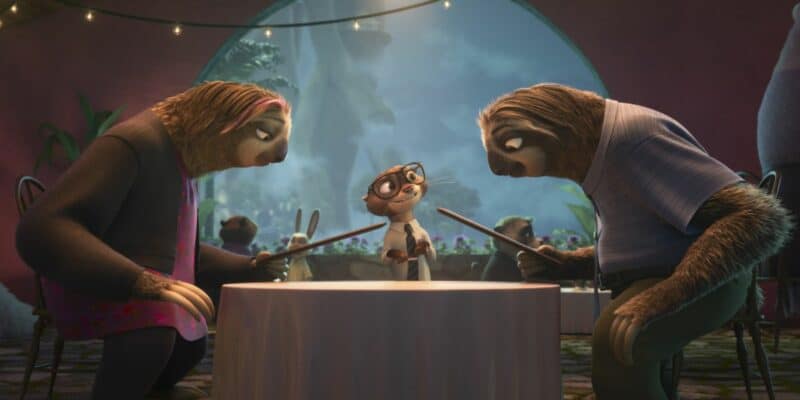 The final episode of Zootopia+ sees the return of everyone’s favorite sloths, Flash (Raymond S Persi) and Priscilla (Kristen Bell) as they head out for dinner with frustrated server Sam (Charlotte Nicdao).

The episode opens with otter Charlotte acing service at the restaurant where she works. She is rushing to get everything sorted for 6pm as she’s got tickets to Gazelle’s concert (continuing the throwbacks seen throughout the show with the reference to Shakira’s character, who appeared in the last episode).

She’s got the birthday cake handled; water ordered; meals underway. But a spanner is thrown into the works with the arrival of Flash and Priscilla, arriving for a romantic meal VERY slowly.

Sam tries to get them seated, and then opts to move the table to them to speed things up. She’s so focused on getting them to speed up, she starts neglecting the rest of her customers. She even tries to put Priscilla’s glasses on for her, as a way to speed up the process.

Related: Where Fans Can Find Nick And Judy In “Zootopia+”

The other guests are getting increasingly vocally frustrated, along with the kitchen. Charlotte rushes through the rest of the diners’ requests in a hurry, meaning she ends up giving the antelope a pitcher of water, the elephants unlit birthday candles and more. They’re not happy at all and confront her.

While this is happening, Flash has — very slowly — proposed to Priscilla. This saves Charlotte’s job, as the diners are placated by the special moment. And then there’s a further twist in the tale, as Flash reveals they too are in a hurry. They’ve got the Gazelle show as well!

Charlotte ends up catching a ride to the concert with the pair in Flash’s superfast, superflash automobile. But his speeding catches the attention of the law.

Police officers Hopps (Ginnifer Goodwin) and Wilde (Jason Bateman) pull them over to issue a speeding ticket and a relieved Charlotte, pinned in the back seat from the speed, offers to get out and walk.

Did you enjoy this final episode of Zootopia+? Let us know in the comments below.