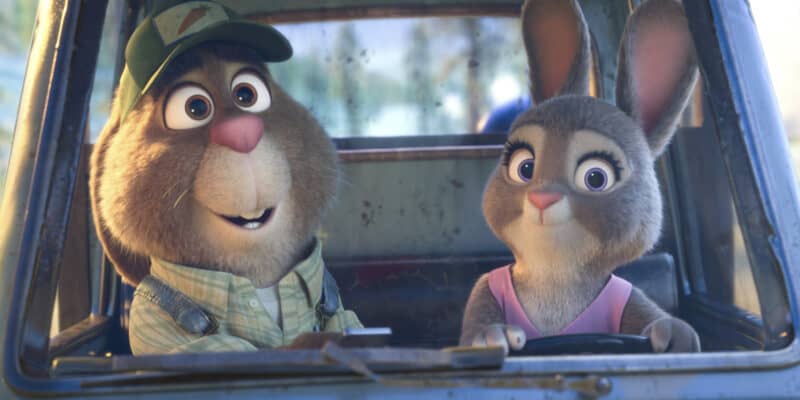 Zootopia+ takes us back to the world of 2016’s Zootopia, a place much like ours — except populated by and designed for talking animals of every kind, in lush, diverse biomes instead.

This first episode follows an untold adventure during the plot of the original movie. When Judy Hopps (Ginnifer Goodwin) boards her train for the big city, waving goodbye to parents Bonnie and Stu (Bonnie Hunt, Don Lake), she unwittingly leaves with her baby sister on board too.

What follows is an exercise in showing character, invention, and humor all during a breakneck car chase.

Diving into the Hopps Family Farms pickup, they hotwire it and take off after the Zootopia express while baby Molly toddles her way first along the train roof, and then down into the cars searching for her sister.

After a near collision sends them careening off-road, they end up crashing up and over the Mystic Spring Oasis Retreat, a yoga workshop led by the yogi yak seen in the original movie.

After catching up to the speeding train, Bon tries to keep the truck on course as Stu reaches out to try and board. During this chaos, we catch a glimpse of Nick Wilde (Jason Bateman), the co-lead of the original Disney Animation Studios movie.

With Stu failing to make the jump to the train, they eventually catch up with the locomotive as it pulls into the station. With Judy heading off to her adventure of a lifetime, Bon and Stu manage to grab baby Molly just before she is hit by another train pulling into the station.

Thrilled at rescuing their child and riding an adrenaline high from the chase, Bon and Stu embrace with a romantic kiss — just as baby Molly gets back on another train heading back to rural Bunnyburrow. Time to chase it down again!

Did you watch the first episode of Zootopia+? What did you think? Let us know in the comments below.