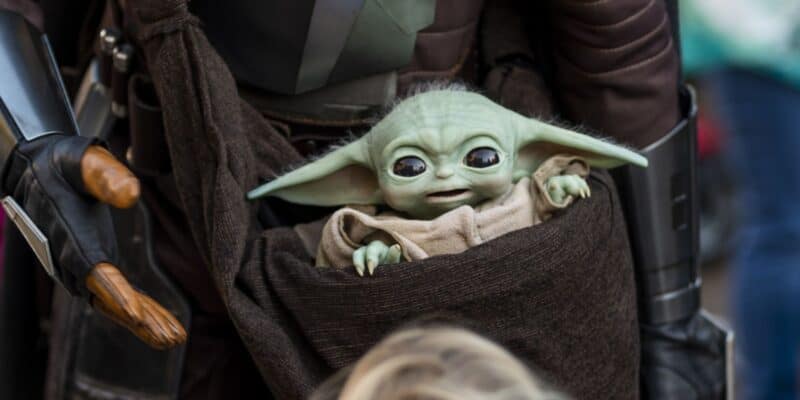 Galaxy’s Edge received a very impressive new Meet and Greet as both Boba Fett and Din Djarin landed on Batuu just last week. However, the silver-clad Mandalorian wasn’t packing light as Grogu, better known as Baby Yoda, traveled with him in his pack. While this is certainly going to be a fan favorite, it could also be Disney hinting at things to come.

The Mandalorian isn’t the first Disney Meet and Greet character to travel with a small companion, that honor could arguably go to Epcot’s Dreamfinder. However, he is one of the more complex characters seen since Star-Lord and Groot graced Disney’s Hollywood Studios way back in 2017. What separates Mando and Grogu from the two Guardians of the Galaxy is that while Groot had to remain under glass, Grogu is on full display. This is obviously going to be a popular addition to Galaxy’s Edge, but it’s also Disney Imagineering sending fans a message that shows what they can be capable of creating.

There are plenty of Disney characters that would greatly benefit from this sort of treatment, especially if they return to the articulated heads seen with Talking Mickey at the Magic Kingdom, but consider the number of new Star Wars and Marvel characters Disney Imagineering could bring to life. With the puppetry and tech seen with Grogu, fans could get a very impressive Rocket and Groot interaction for Cosmic Rewind at Epcot if Disney so desires. While no official statement has been made by the company or the Parks, this could be the start of a revolution for one of the Parks’ most incredible experiences.

Meeting the characters at Disney is practically a mandatory activity for many Guests, regardless of Park. The idea of more interactive features on certain “masked” characters, however, is certainly enough for more than a few raised eyebrows. While the Mandalorian’s interactions seem to pre-recorded in the vein of Kylo Ren and Darth Vader’s interactions, the suit, voice, and especially Grogu, are incredibly advanced. The details have certainly come a long way since the classic characters first appeared.

Related: Will Yaddle Return In ‘Star Wars: Tales of the Jedi’ Season 2?

The Mandalorian Meet and Greet is certainly a favorable move on Disney’s part, and it definitely opens the door for more advance characters and experiences in the future. Given recent developments within the company, however, it might be some time before fans truly see the peak of Imagineering regarding character and Guest interactions. Only time will tell.

Have you seen the Mandalorian and Grogu at Galaxy’s Edge? Tell us in the comments below!