How K-2SO Should Enter 'Andor' Season 2 - Inside the Magic 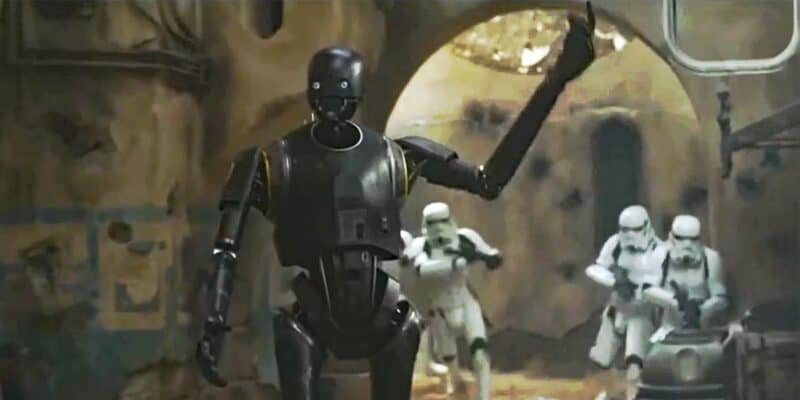 Diego Luna’s Andor has a great and simple way to introduce Cassian’s counterpart in Season 2.

Based on their time together in Rogue One: A Star Wars Story (2016), Cassian and K-2SO spent considerable time before Felicity Jones’ Jyn Erso entered the picture. After Cassian’s last visit with KX Droid, leaving him nearly dying, K-2SO probably won’t start as best buds.

So far, the droid has appeared very little in Star Wars. For the most part, the droid is only casually seen in Imperial facilities where prisoners are held due to their incredible strength and durability. They can take a lot of blaster fire and still easily crush an enemy.

The Mandalorian and Jedi Fallen Order did show more of these droids being used by the Galactic Empire, but for the most part, they are still a rare appearance in the Imperial ranks. With the Rebel Alliance beginning to grow bolder in their attacks against the Empire, there will be more casualties.

Ferrix is proof of that, as the men and women who fought for freedom after Maarva’s speech knew the cost of their freedom. With only their fists and the stones on the ground, they stood no chance against armed soldiers in armor, but that didn’t stop them. This determination keeps the Rebellion moving forward and gets important people arrested.

At one point in the following year, Cassian will probably have to rescue a vital Rebel official. Due to the facility’s security, Cassian will need help, and that’s where K-2SO comes in. From one of his sources, Stellan Skarsgard’s Luthen Rael will find a way to ahold of the droid and give it to the Rebel for the mission.

Due to his previous encounters, Cassian will be skeptical until K-2SO saves his life during the mission solidifying their relationship as they will become partners during their fight against the Empire. Alan Tudyk’s K-2SO was initially rumored to appear in Season 1 of Andor, but since that didn’t happen, it makes sense that the opening arc will introduce the droid and create more hype for the show.

If K-2SO appears, later on, it won’t be near the end as that won’t be enough time for fans to see the two come closer together since the series will have a lot of time jumps as it will cover four years of the Rebellion in one season. Tony Gilroy knows what he is doing, so there’s hope that K-2SO’s role in Season 2 won’t be a minor one but a consistent role as he becomes Cassian’s friend.

Do you think K-2SO will have a large role in Season 2 of Andor?

Comments Off on How K-2SO Should Enter ‘Andor’ Season 2