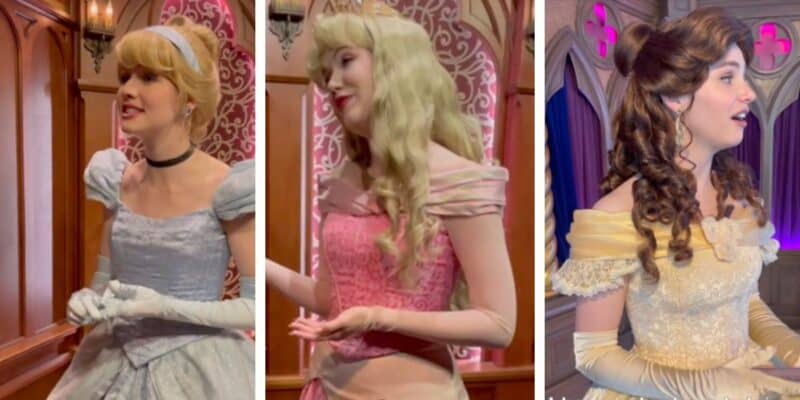 Though the Disney Parks and Resorts are famous for their thrilling attractions, detailed rides, and world-class live entertainment, a huge aspect of the Disney Parks comes from the Cast Members themselves.

Interactions with Cast Members can often times make a magical Disney trip that much more special and Disney employees are trained to do so, especially the ones representing your favorite characters.

At the Disney Parks, Guests can meet all sorts of characters ranging from franchises like Star Wars and Marvel to characters from animated Disney classics.

A video was shared online of an absolutely heartwarming moment where a transgender Guest got to meet several Disney princesses, including all the classics like Cinderella, Sleeping Beauty, Belle, and of course, Rapunzel. The Guest explains their personal story as well as how important Disney is to them.

Throughout the video, the Guest describes just how crucial all of the classic Disney animated films were for them growing up, especially the ones involving the very princess they

You can watch the full video down below or by clicking here.

Aside from a very positive Guest interaction and experience, what this video really highlights is how passionate Disney Cast Members are about their job, especially the ones representing these characters. Several users in the comment section also noted this aspect of the video.
One user said, “Reasons why Disney Characters at the parks are just the best. I can’t tell you how many times a character has been able to brighten my day when on vacation.” Another user said, “Every girl at Disney deserves to have her special moment with the princesses. I’m glad you got yours, even if it came a little later than others <3.”

Disney has been making great strides in becoming more progressive and inclusive, both inside and out.

Recently, The Walt Disney Company committed to the use of gender neutral pronouns throughout its Disney Park properties and one executive asserted that at least 50% of all new Disney characters in movies and Disney+ Original series will be minorities or LGBTQIA+.

In its continued bid to be more inclusive, Disney also updated the “Disney Look” for Disney theme park Cast Members last year. Many gender-specific pieces of attire are no longer required and policies regarding hairstyles, tattoo visibility, and certain other personal appearance choices have become more relaxed.

Do you have a memorable moment with Disney Cast Members?