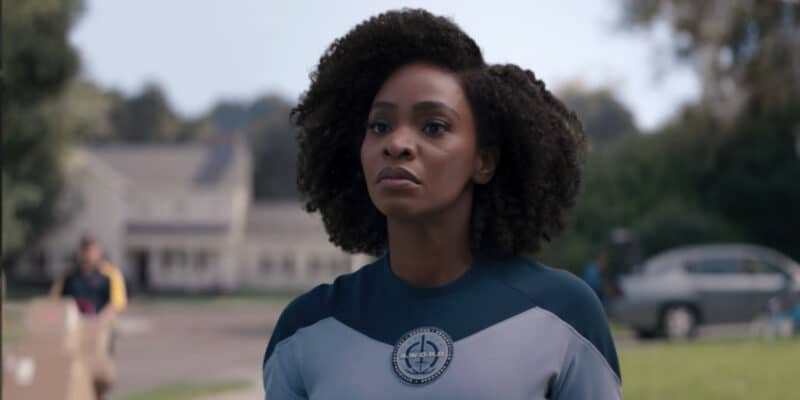 They’re back, and with new Marvelous (pun intended) costumes!

Earlier this year, audiences saw a post credit scene following the final episode of the Disney+ series, Ms. Marvel (2022), in which Kamala Khan (Iman Vellani) and Carol Danvers (Brie Larson) inexplicably switched places. This small moment teased the setup for the upcoming Marvel Cinematic Universe film, The Marvels (2023), and, according to a small clip previewed at the 2022 D23 Expo, introduced the conflict, and manner in which the three heroes, Danvers (Larson), Khan (Vellani), and Monica Rambeau (Teyonah Parris) will all join forces.

Picking up right were Ms. Marvel (2022) left off, the three heroes will be struggling with the fact that every time they use their powers, they swap places with one another. While we’ve seen Captain Marvel’s (Larson) new suit in Ms. Marvel, and sneak peaks at Ms. Marvel’s (Vellani) new suit, the image released today by Instagram user, @umportalgeek gives us our first look at Photon (Parris) in her new suit!

First official look  at the women of “The Marvels”. 💥

Take a look at their new suits here!

Introduced as an adult in Wandavision (2021), Monica Rambeau/Photon (Parris) is the daughter of Maria Rambeau (Lashana Lynch), Carol Danvers’ (Larson) friend and fellow pilot. Monica (Parris) enters the action as a SWORD agent sent to deal with the Westview situation created by Wanda Maximoff (Elizabeth Olsen). Through her interaction with the chaos magic created by Maximoff (Olsen), Monica (Parris) gains powers that allow her to go head to head with the Scarlet Witch, as well as the villains plaguing the town.