EPCOT Characters Get Special Holiday Meet And Greets - Inside the Magic 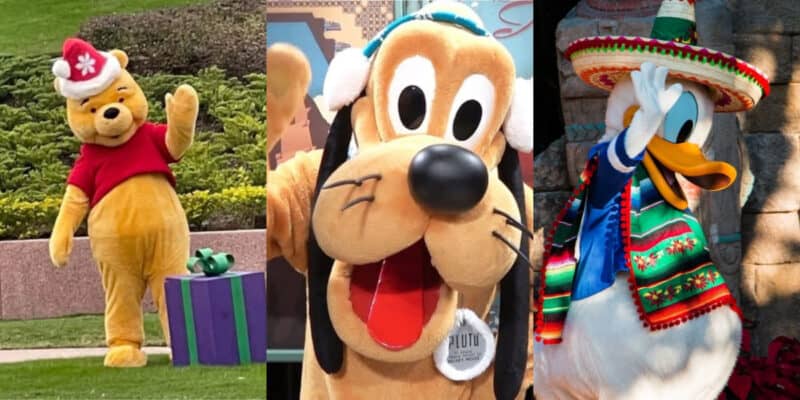 The holidays have come to the Disney Parks once again, and it seems like everyone and everything is getting into the spirit of the season. From the Magic Kingdom to Disney’s Hollywood Studios, the halls have been decked out in lights, ribbon, holly, and ivy to ring in the holidays, and even the characters are getting in on the action too.

While Guests might be exposed to more specially-dressed characters during events like Mickey’s Very Merry Christmas Party, EPCOT’s International Festival of the Holidays also has more than a few special Meet and Greet opportunities, some of which are only exclusive to the Park’s event. Guests will still be able to mix and mingle with their favorite familiar faces, but certain characters have been given a little extra holiday magic to improve their seasonal looks.

This year, Pluto has been fitted with a new pair of earmuffs as well as a wintery collar to pull the look together. Despite being one of the most popular Meet and Greet characters, Pluto doesn’t really change all that much save for certain seasonal events. Seeing Disney give him a little something extra in time for the winter holidays is certainly a detail that doesn’t go unnoticed by dedicated fans.

Winnie the Pooh is always a joy to meet in the Parks, no matter where fans might find him. That being said, his appearance in the gardens beside EPCOT’s Imagination Pavilion has been met with plenty of positive responses from fans. Watching him chase butterflies with a giant net is something as cute and wholesome as the character can possibly be.

Related: All the Holidays Celebrated at EPCOT

Pooh has returned to the spot for the holidays, but now he’s donned some festive Santa-esque attire to get in on the Christmastime fun. While Disney could have gone all the way in giving him a full Santa Suit as seen in Winnie the Pooh and Christmas Too, that’s not to say this isn’t an adorable look.

Las Posadas has arrived early at EPCOT’s Mexico Pavilion, and the warm vibes are radiating from the Aztec pyramid. While it’s a minor change to his themed attire, Donald Duck has donned a new poinsettia-decked poncho to go with his sombrero this year.

While it might seem small compared to other seasonable add-ons, Donald in his Gran Fiesta outfit has something of a fan following, and it’s nice to see Disney take notice by getting him in on the celebrations.

Which characters have you seen at EPCOT this holiday season? Tell us in the comments below!

Comments Off on EPCOT Characters Get Special Holiday Meet And Greets