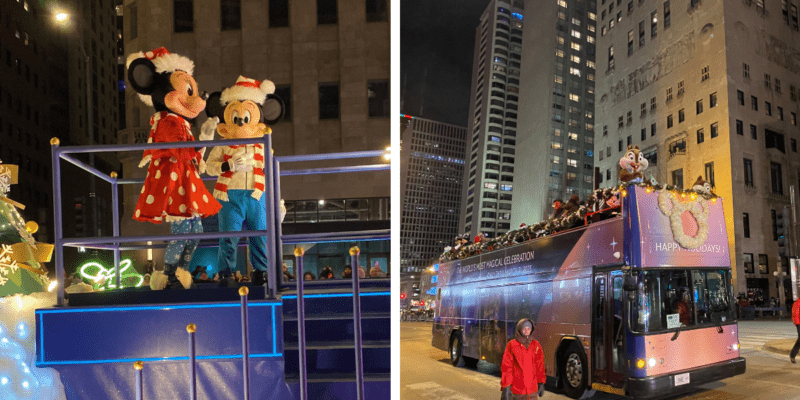 Credit: Inside the Magic Jess Colopy

We all know Walt Disney World Resort for its home in sunny Central Florida. But did you know it brings its magic up to the chilly north just once per year?

On the Saturday before Thanksgiving each year, the Disney Parks’ own Mickey Mouse and Minnie Mouse are the Grand Marshals of the Wintrust Magnificent Mile Lights Festival Parade in Downtown Chicago. Moreover, Mickey and Minnie use their magic to light the trees along Michigan Avenue and officially kick off the holiday season!

We attended the parade on Saturday, November 19. But if you missed out, don’t worry! We’re here to share the magic with you, and you can watch along on your local ABC channel throughout the holiday season!

Of course, the parade is headlined by Mickey and Minnie Mouse. On each block, the pair ask the crowd to count down from five as they light over a million gleaming bulbs on the trees that line the Magnificent Mile – a historical and legendary shopping district in the River North neighborhood of Chicago.

As the lights come on, Mickey and Minnie’s festive float shoots off majestic fireworks that have the whole crowd cheering! The parade continues with towering holiday balloons and high school marching bands from around the country. But the Disney Park fun isn’t done yet!

It’s time to talk about Bruno! While he didn’t attend the Festival of Lights, his niece Mirabel Madrigal did. Riding in a horse-drawn carriage, the beloved Encanto (2021) heroine waves to fans wearing brand-new blue mittens, perfect on a 17-degree day in Chicago.

Mirabel’s sparkling white carriage is decorated with signs advertising the 50th Anniversary of Walt Disney World Resort, which started in 2021 and ends in March 2023.

Last but not least, Chip and Dale ride atop another impressive double-decker bus full of even more Disney Cast Members! As the chipmunks wave to the crowd, the bus advertises Disney’s Hollywood Studios, Magic Kingdom, EPCOT, and Disney’s Animal Kingdom.

No Christmas parade is complete without a visit from Santa Clause. While it’s not the sun-kissed Santa from Walt Disney World Resort, the Wintrust Magnificent Mile Festival of Lights Parade ends with the big man himself atop his sleigh, who is joined by his reindeer, wishing all a good night!

Check your local ABC station schedule to watch Mickey and Minnie Mouse headline the Festival of Lights Parade. Or plan a trip to Chicago next November!

Will you be watching the Magnificent Mile Lights Parade on TV?