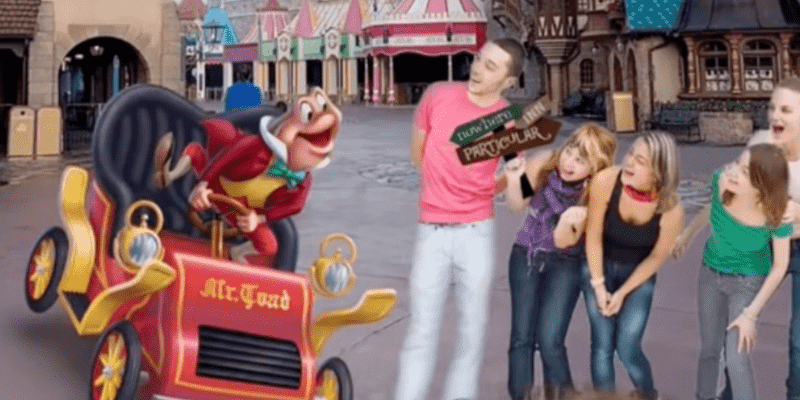 Disney Photo Pass Cast Members make sure everyone’s in the picture! Whether you purchase a day of photos or Disney Memory Maker for a vacation’s worth of memories, you’re sure to be delighted by the magical moments you’ll capture during your Walt Disney World Resort visit.

Sometimes, Photo Pass Cast Members offer “Magic Shots.” Cast Members will instruct you to do a specific pose or expression for these photos. When the picture shows up on the My Disney Experience app, a character or special effect will “magically” appear on your image!

Walt Disney World Resort recently announced that Mr. Toad would triumphantly return to the Florida Disney Parks with his own Magic Shot alongside a popcorn bucket and themed treats.

However, the Disney Park quickly deleted its original announcement after fans noticed a poor photoshop job. Emily Z. (@magically_emily) shared a screenshot of the post on TikTok:

“Now, if you look at this photo super quickly, you might not think that anything’s off about it, but it could be one of the worst photoshop jobs I’ve ever seen,” Emily explained. “This is an actual photo that an official Disney account posted.”

Emily continued to point out all the issues with the photo, including the outdated outfits and terrible background removal.

“Look at their jeans! You can see the original watermark that’s on the photo,” Emily noted. “They didn’t even take that off. Also, she’s doing a great job holding onto that sign there.”

“Who did this? And who allowed this to be posted? Because this is beyond embarrassing photoshop fails,” Emily said. “As you can see, this post now only has three photos, so they did delete this after they received the comments like, ‘What in the weird photoshop wackiness is going on there?’ But how does a company like Disney post online something that looks so bad?”

Many commenters agreed and said it was likely a mock-up for a better edit, never meant to be shared publicly. “Definitely a mock up that never should’ve gotten into anyones hands. That person can get in big trouble. 🫤,” @cantoloopy wrote.

“It feels like someone was mocking it up and the unfinished version got uploaded,” @manchestercole agreed.

Did you see this picture before it was taken down?