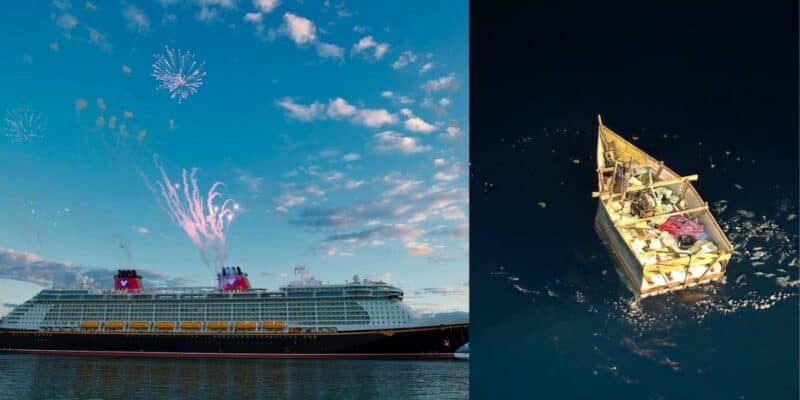 Disney Cruise Line ships make sailing on the ocean a magical experience, whether you’re enjoying a delicious themed meal, enjoying an attraction on the ship, or even exploring a nearby private island!

However, sailing isn’t always pleasant, as the ocean can be a scary place. In fact, a Guest shared a recent experience of the Disney Fantasy stopping to rescue a damaged boat with no one onboard.

The poster explained more about what happened on the cruise ship:

Fantasy stopped dead in the water on Nov 10 around 11 pm to check out this adrift boat. Seemed to be broken in half and abandoned. After 20 minutes or so, the bridge turned off their spotlight and we carried along. Incredibly eerie.

The poster also explained that they caught this incident happening while watching Saving Mr. Banks on the veranda, also noting how quickly the ship’s crew was able to slow down and stop the ship altogether.

Reddit user thejellicleball explained the reasoning behind this stop to others in the comments:

Maritime law dictates that if any ship (cargo, cruise, etc) comes across a small craft with what appears to be survivors or refugees at sea, the ship MUST rescue them and bring them aboard, even if they refuse rescue. From there the ship will likely arrange to return the people to where they came from, or drop them at the nearest port. In this case, it’s likely the individuals on this craft were picked up by another ship and the craft was left behind.

User wrenrich also shared the possibility of the boat’s passengers being rescued:

It’s possible this was the boat from the people picked up by the NCL ship a couple of days ago. At least that’s what I’m hoping.

Although many commenters were surprised, others explained that this scenario has also happened when they were also onboard certain Disney cruises, like the Disney Wish. A few of the commenters even remarked that they were onboard the same ship as the poster when this incident occurred.

Other comments discussed the possibility that this boat was smuggling certain goods, while others hoped for the safety of the missing boat passengers and praised the ship’s watch crew for noticing this boat and taking action.

If this experience has shown us anything, it’s to be careful when navigating the ocean. As a few of the post’s commenters noted, the ocean should always be taken seriously, especially at night.

Has anything like this happened to you while on a cruise or on a ship in general? Tell us your experience in the comments!