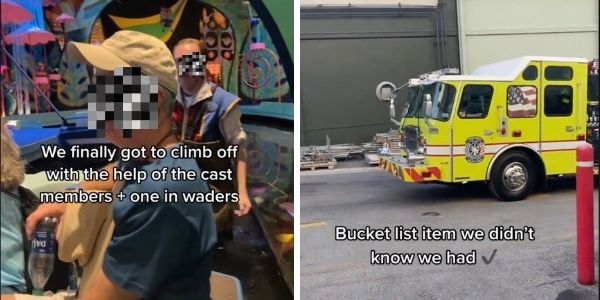 A few Guests needed assistance after an iconic Disney World attraction got stuck, leaving riders stranded in the water.

When visiting Disney Parks, you may encounter a few issues and speed bumps along the way. With so many rides, attractions, and shows, things are bound to not go perfectly sometimes. Disney Park veterans know that getting stuck on the Haunted Mansion or “it’s a small world” is a common occurrence as these are slower-moving rides that take in lots of Guests daily.

And speaking of “it’s a small world” a few Guests recently had quite an interesting experience after the ride got stuck the other day.

In a video shared to TikTok by @momstersinc_, you can see that “it’s a small world” encountered a major traffic jam leaving Guests stuck for almost an hour. EVentually, Cast Members had to rescue the Guests with one brave Cast Member even wading into the water to help assist the trapped Guests:

Talk about a memory

As you can see, Guests riding “it’s a small world” at Walt Disney World got stuck needing assistance, Eventually, everyone was safely evacuated. When this happens, Guests are usually given a Lightning Lane pass for their choice of ride to make up for the inconvenience.

Have you ever had to evacuate this ride?