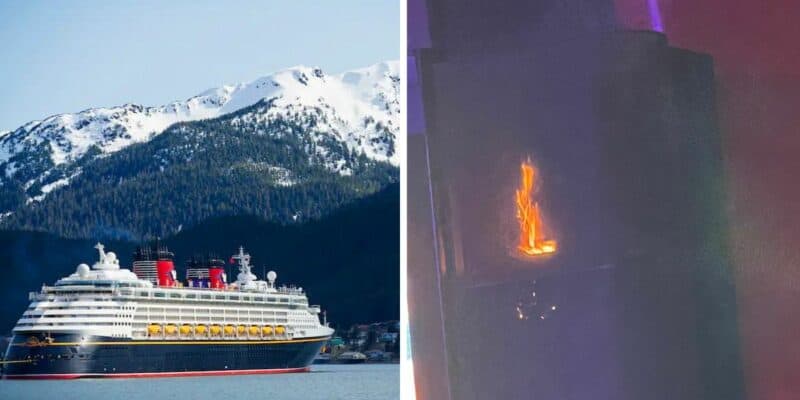 An incident forced Guests to evacuate several decks of a Disney Cruise Ship.

A small fire broke out aboard the Disney Wish late Wednesday evening. Flames could be seen emerging from a speaker to the right of the ship’s “Funnel Vision” screen. This is located on deck 9 of the ship.

Guests began to report seeing smoke, but flames quickly appeared as well and started to grow in size. It is believed that a short circuit caused the fire.

You can see a photo of the incident shared by a Guest on Twitter:

Small fire tonight on Disney Wonder – see flames off top right of the screen. Decks 9 and 10 evacuated while crew addresses

Related: Rumors Claim Johnny Depp Is Finally Returning to ‘Pirates of the Caribbean’

Emergency crews quickly responded, and parts of Deck 9 and 10 were evacuated to make sure Guests were safe and away from any danger.

The accident occurred on the night of Disney Cruise Line’s Pirate Night, an event where Guests are encouraged to dress up like a pirate as well as enjoy some great entertainment.

You can get a closer look at the small fire thanks to a tweet from Theme Park This Podcast (@ThemeParkThis):

Pirate Night on the Disney Wonder had to be evacuated because of a speaker fire. @bortatx will report his story on the @DuelingGenre Patreon. https://t.co/SbL2g0xmbN pic.twitter.com/vuXR4kAVGH

Thankfully, this incident did not cause any trouble or delays for Disney Wonder. It’s important to note that Disney takes extra precautions to ensure Guests are as safe as possible, meaning Guests are not allowed to bring fireworks, flares, any combustible liquids such as liquid oxygen, candles, electric blankets, electric irons or steamers, hot plates, heating pads or holiday light strings aboard.

Coincidentally, quite a larger fire broke out at Walt Disney World just the other day.

Have you set sail on a Disney Cruise Line ship? What’s your favorite ship in the fleet?