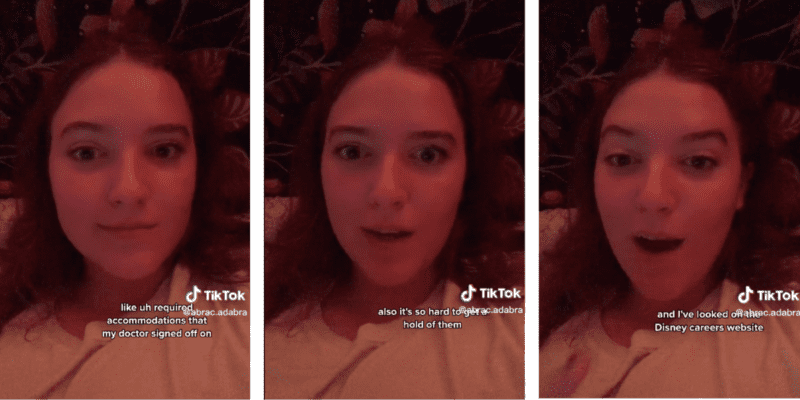 Over the past year, Disneyland Resort, Disneyland Paris, and Walt Disney World Resort have honored, uplifted, and celebrated disabled Disney Cast Members like never before.

However, there is always more work to be done. After months of trying to receive accommodations for her Ehlers-Danlos Syndrome, one Disney Parks Cast Member took to social media to beg for help:

please help. the way disabled people are treated in the US, even at the most inclusive of places, is so laughable. #disablitycheck #EDS #ehlersdanlos #waltdisneyworld #castmember #disney #disabled #disabledcastmember

Abra started working at Walt Disney World Resort in October 2021 but stopped working in April due to complications with her disability. She submitted accommodations paperwork and a doctor’s letter at the end of August and heard back in September that her name was “in the running” to be transferred to another role.

“I’m posting this in the hopes that somebody who knows somebody at Disney casting or accommodations at Walt Disney World can help me because I am desperate,” Abra explained. “Mind you; my accommodations are not much. It’s really not that bad… They’re very reasonable and manageable.”

It’s been two months, and Abra has reached out multiple times but said it’s nearly impossible to get in touch with anyone. When she does, they have no updates for her.

Even worse, Abra has checked the Disney Careers website only to find that Disney is hiring in many of the positions Abra said she would be willing to be transferred to. “Literally anything that could accommodate me. I don’t care what it is,” the Walt Disney World Cast Member said she told the disability accommodations office.

At the time of this article’s publication, Abra has not publicly shared a response from the Disney Park.