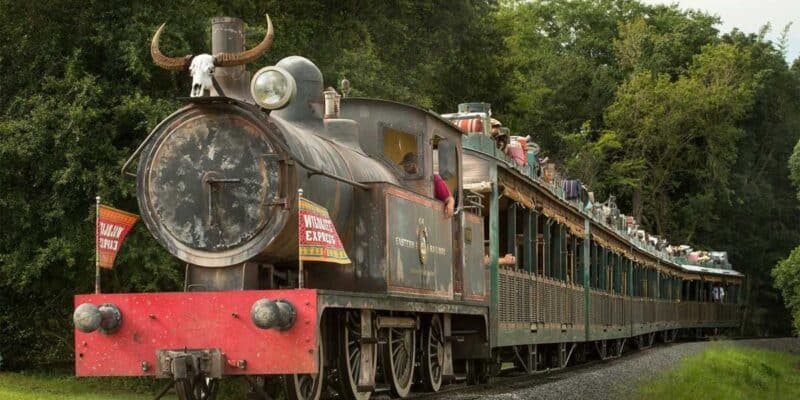 After a long absence, rounds of maintenance, and even a global pandemic, the beloved trains of the Walt Disney World Railroad have been seen being prepped and tested before making their triumphant return to the Parks. Although they haven’t made an official return just yet, the Parks still have an avid love for locomotives that can be observed around the property.

Walt Disney had an absolutely infectious love for trains, both big and small, and it definitely had a heavy influence on his theme parks. From the Lilly Belle and Casey Jr. at Disneyland to the Big Thunder Mountain at the Magic Kingdom, Walt’s healthy obsession with them helped shape the layout of both Disneyland and Walt Disney World.  The Walt Disney World Railroad was undoubtedly the best way to get from one end of the park to the other, and all while getting off your feet in the process. However, the steam trains that race around the Magic Kingdom aren’t the only ones readily rolling down the tracks.

Walt would absolutely lose his mind if he could take a trip on the monorail that runs through both Epcot and the Magic Kingdom, as well as the resorts. The idea of a train to the parks running through the middle of a hotel lobby at the Contemporary is enough to impress even the greenest of Guests. however, there are perhaps few better ways of getting a scenic tour around the Walt Disney World property than by enjoying the full loop of the Monorail, especially at night. Guests considering an alternative view of the Parks wouldn’t be wrong for taking a full circle trip.

Of course, an often overlooked attraction is the Wildlife Express in Disney’s Animal Kingdom. Not only does this train ride take guests to Rafiki’s Planet Watch, but it also offers a behind-the-scenes view of the animal study and treatment facilities. The most notable feature is the sideways-facing cars of the train’s rolling stock, giving Guests a unique perspective of Disney’s wildest park.

At the end of the day, there are so many ways to ride the rails and to see the best sights Disney has to offer. It’s certainly a pastime Walt Disney enjoyed, so why not share in the journey? Once the Magic Kingdom Railroad is back in operation, fans with will have three different opportunities to take a trip down the tracks.

Have you enjoyed a train ride through the Disney Parks? Tell us in the comments below!

Comments Off on What Trains to Take at the Disney Parks