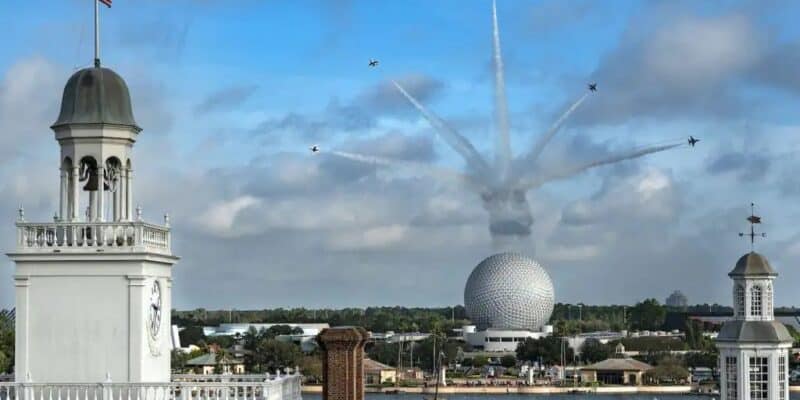 November marks National Veterans and Military Families Month. It’s a special time when we can honor the veterans and military members in our lives, especially on Veterans’ Day, which is on November 11.

In honor of this month, and to honor the incredible efforts of our U.S. military, the U.S. Air Force Thunderbirds will be flying over Disney World tomorrow, October 27.

According to this article from Spectrum News 13, the Thunderbirds will be flying over Magic Kingdom starting at 9:30 a.m. EST, if the weather permits.

In case you’re not familiar, the Thunderbirds are a unique group of individuals who perform flight demonstrations, showcasing the capabilities of the Air Force and their pilots, specifically for their multi-role fighter jet, the F-16 Fighting Falcon. The goal of the Thunderbirds is to inspire those who watch these flyovers and air shows, exciting them about all that is going on in the Air Force and giving them a sense of pride in the military.

The Thunderbirds have a unique and layered history as well, according to the Air Force:

On May 25, 1953, just six years after the U.S. Air Force became its own branch of service, the Thunderbirds were born as the Air Force’s official air demonstration team. The team, designated the 3600th Air Demonstration Unit, was activated at Luke AFB, Arizona. Over the years and with many different aircraft, the Thunderbirds have continued to represent those who deserve the most credit: the hardworking Airmen who serve our country every day.

The Thunderbirds have flown over the Disney Parks in the past, including Disneyland in May 2020 and EPCOT in October 2020.

Tomorrow, however, the flight demonstration team will conduct two flyovers over Magic Kingdom, specifically the delta maneuver, as they fly over Cinderella Castle and go in different directions.

After this flyover, the Thunderbirds will be conducting more performances in Sanford, Florida, at the Orlando Air & Space Show, running from October 29 to 30.

According to the U.S. Air Force, these are the kinds of demonstrations you can expect to see while at an airshow:

The demonstration is a mix of six aircraft performing formation flying and solo routines. The four-ship Diamond formation showcases the precision and training of U.S. Air Force Pilots, as well as the gracefulness of the F-16. The two solos display the power and maximum capabilities of the mighty F-16 Fighting Falcon, a frontline fighter.

If you haven’t seen these performers in person before, you should definitely make time to see them! They tour on a regular basis, so be sure to keep an eye on the website and see if they’re coming to a place near you.

Have you ever seen the Thunderbirds perform live? What did you think about it?