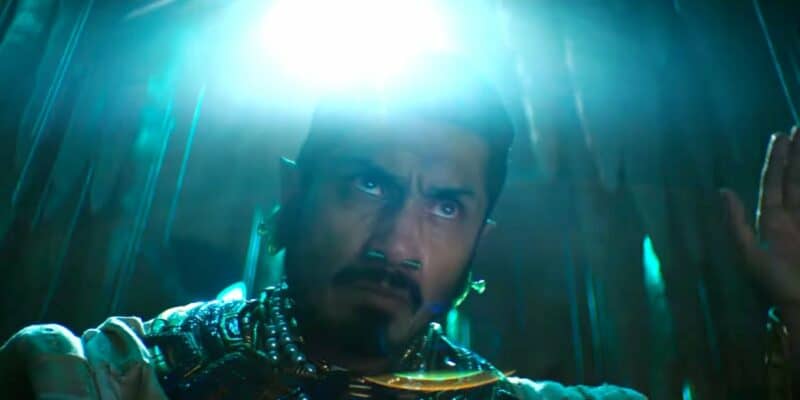 Tenoch Huerta, who will be making history in the Marvel Cinematic Universe by playing Namor in the highly anticipated sequel Black Panther: Wakanda Forever, recently shared more details about his MCU debut in an interview with El Escorpión Dorado, a Mexican influencer, as both drove around Mexico City.

Huerta commented on his role in the MCU, jokingly saying, “I’m not a fan, but they pay me.” He also confessed he had no idea of his character’s impact on the fans.

“I did like watching Marvel movies. Namor didn’t exist, I knew who he was, obviously, but I didn’t know of the character’s transcendence within the comic world. Because Marvel was founded when three companies merged, and those three companies each had a superhero, and one of those superheroes, was Namor, the submariner,” said Huerta in the interview.

Huerta also mentioned how his initial online meeting with Marvel froze for about five minutes and how he practically agreed to the role without knowing all details about his character, in addition to allegedly lying to get the part when asked if he knew how to swim. “If I tell them I don’t know how to swim, they won’t give me the job. I got scared. I thought I’d learn later. I’ll jump in Xochimilco, in the River of the Remedies, anything,” said the actor. “Strictly speaking, I didn’t lie. They asked me, ‘Can you swim?’ I said, ‘I haven’t drowned,’ which is true; I wouldn’t be here.”

During the ride and interview, the influencer took Tenoch Huerta to different locations around Mexico City until they arrived at a mural painted in honor of the actor with elements of the Mexican culture like a Xoloitzcuintle, Quetzalcoatl, and a jaguar. Moved and speechless, Tenoch wiped his eyes and said, “What can I tell you? This is more […] amazing than any […] Oscar, for real, for real, this is worth more.”

Huerta then got off the vehicle to meet Rafael Medina, the mural creator. The latter commented he admired Tenoch’s work in series like Narcos: Mexico and Blue Demon, adding that the Mexican actor was breaking stereotypes and opening doors for all the artists. Huerta asked to be invited to the official reveal of the mural, which was still not completed at the moment of his visit.

There is no doubt that Tenoch Huerta is proud of his introduction to the Marvel Cinematic Universe, and Mexican fans are beyond excited to see him representing the country in the growing actor roster within the MCU. Huerta joins Gael García Bernal, who played Jack Russell in Werewolf by Night (2022), and Salma Hayek, Ajak in Eternals (2021), as the representatives of Mexican talent in the Marvel Cinematic Universe.

Will you watch Black Panther: Wakanda Forever once it premieres? Let us know in the comments below!

Comments Off on ‘Black Panther’ Actor Tenoch Huerta Breaks Down In Tears After Seeing Mural, “It’s Worth More Than an Oscar”