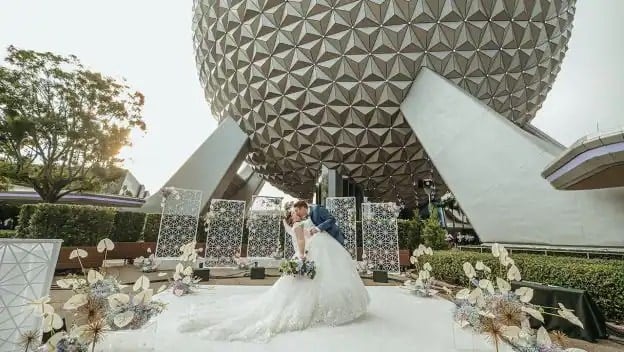 Weddings are a beautiful time of celebrating lifelong love and devotion and being able to share this celebration with family and friends. This year has seen the biggest wedding boom since 1984, and October is the busiest month for weddings in 2022 so far.

Brooke Weber and Jared Merenuk are one of several couples getting married in the busiest wedding season this year, and they have a special history.

And if you’re Disney fans like this couple is, where else would be the most magical place to celebrate your special day other than the Disney Parks? That’s why Good Morning America teamed up with Disney’s Fairy Tale Weddings to help this couple’s dreams of getting married at Disney come true.

Related: You Can Now Get Married at Disney World for Only $7,500!

Brooke and Jared met as lab partners at a Georgia Tech circuits lab, and they were both Aerospace Engineering students. They dated for three years and eventually moved to Florida, as they both had jobs at Boeing, working on the Space Launch System rocket as part of the Artemis mission.

The couple were engaged at NASA’s Kennedy Space Center in Florida. According to Brooke,

“Jared decided the perfect place to propose would be the Vehicle Assembly Building at Kennedy Space Center, since our love of space brought us together, and — as he said when he asked — because ‘he loves me to the moon and back’ …like the Artemis missions.”

Related: Disney Bride Warns Fans What To Know Before Spending $25,000+ on a Park Wedding

Brooke and Jared connect well with each other, not just about space but about Disney as well. Even their cats are named Mickey and Minnie.

To celebrate getting married, the couple went to Magic Kingdom, where they participated in a different celebration- Disney World’s 50th Anniversary- and were able to try some new treats and experiences. They even got a surprise visit from Mickey and Minnie Mouse.

Then, they got married at EPCOT in front of Spaceship Earth, the perfect venue for this space-themed event.

The ceremony was a culmination of a magical week spent with 50 of their closest friends and family at Walt Disney World during the World’s Most Magical Celebration! Brooke and Jared kicked off the festivities with a Welcome Party at EPCOT, which included galactic-inspired desserts, a viewing of “Harmonious,” and a ride on Guardians of the Galaxy: Cosmic Rewind. They even had a special visit from Mickey Mouse and Minnie Mouse.

What did you think of this couple’s love story? If you had the chance to get married at a Disney Park, which one would it be?