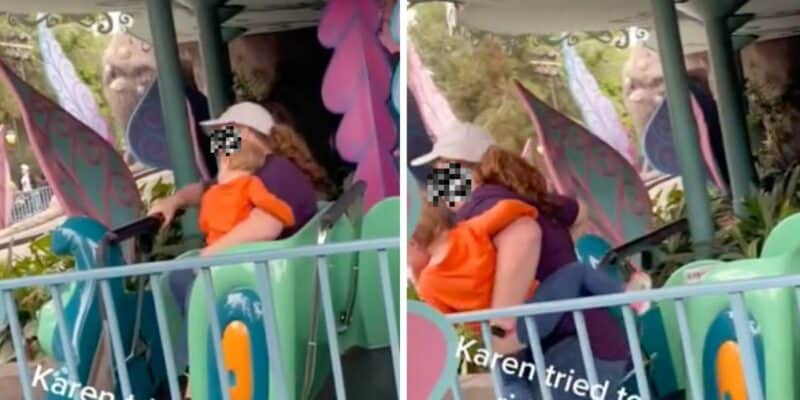 While Disneyland is called “The Happiest Place on Earth,” that doesn’t mean things can’t go wrong while in the Disney Parks. From ride breakdowns to disappointing food, sometimes Guests can have negative experiences, especially when an argument breaks out.

When visiting Disneyland, it may be a little daunting trying to decide where to head and what to ride. From the iconic Haunted Mansion to newer experiences like Star Wars: Rise of the Resistance, Guests are bound to be in for a good time.

One ride stands above the rest, however, when it comes to how unique it is.

Alice in Wonderland is just as much of a classic story as it is a classic dark ride at the Disneyland Resort.

At this attraction, Guests can “take a topsy-turvy trip into the nonsensical world of Disney’s Alice in Wonderland aboard an oversized caterpillar.” The ride is legendary within the Disneyland Resort and something a lot of East Coast Disney Park fans wish they could experience.

However, something not-so-magical happened recently that went viral on social media.

During an encounter involving a Guest who appears to be holding their child, the Guest skips past other Guests waiting in line and hops into a ride vehicle. Some yelling occurs before the Guest quickly gets up and storms out of the attraction with a child in tow.

The Guest then starts yelling at others from outside the attraction’s metal fence.

The video was shared on social media. You can check out the full video down below. Just a warning, the video contains explicit language:

A mom at Disney decides she doesn’t have to wait in line.

A mom at Disney decides she doesn’t have to wait in line. from PublicFreakout

The video ends shortly after the Guest yells “f*** you” at the Guest recording. We are unsure how this situation was handled or what exactly started it in the first place.

More on the attraction at Disneyland:

Wind along a curving path surrounded by surreal sights, dazzling colors and madcap music as you retrace the steps of Alice and her adventures in Wonderland.

Glide through the White Rabbit’s House, Tulgey Wood and the Queen’s Garden. Encounter Wonderland locals The Mad Hatter, Tweedledee and Tweedledum, The Cheshire Cat and more.

Down and down you go, until you come face-to-face with the Queen of Hearts, who cries “Off with their heads!”

Can you escape in time to make it to the “unbirthday” party, where you’re the guest of honor? Curiouser and curiouser!

You won’t find this charming attraction anywhere else! It made its Fantasyland debut on June 14, 1958, nearly 3 years after Disneyland Park opened to the public, and it’s only gotten better over the years.

In 1984, the painted cut-outs of the original attraction were replaced with three-dimensional characters. New lighting and special effects were also added in 2014. After 50 years, Alice in Wonderland continues to be a favorite stop in Fantasyland for both children and adults.

What are your thoughts on the video?